We have tested the ADAM A8X speakers!

We have tested the ADAM A8X speakers! 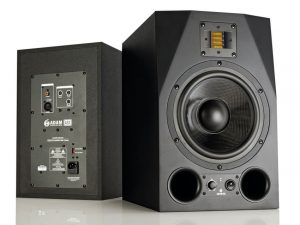 The protagonist of our latest test was a pair of German-made ADAM A8X speakers. ADAM speakers have been used by sound engineers for professional sound mixing for more than 10 years. Over time, the manufacturing company has come up with more affordable price models for home, hobby hi-fi fans as well, although it is still one of the more expensive speakers.The most powerful two-way monitor in the AX series is the A8.

The subwoofer is powered by a 150-watt amplifier and the tape tweeter by a 50-watt amplifier. The tape tweeter is the most defining part of this type, developed by Dr. Oskar Heil. ADAM engineers have adopted and further developed this technology. The essence of X-ART (Extended Accelerating Ribbon Technology) is the pleated membrane, in which the folds are compressed or expanded due to sounds coming to their surface. The air is sucked in or out harmoniously, producing a more accurate sound as described by the manufacturer.

The A8X features a carbon fiber subwoofer and a 56mm X-ART tweeter. Its front, two-port design extends the frequency response to 38 Hz. Due to the shape of the subwoofer cone, we will get fast and definite bass sounds. There are, of course, inputs on the back panel, as well as EQ and tweeter controls. It has three back panel controls that help you customize the sound to suit your own tastes and the characteristics of the room. 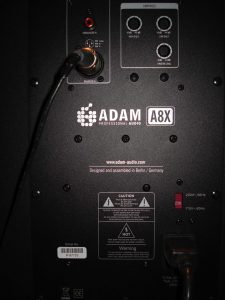 Pulse Width Modulation (PWM), also known as Class D gain or switching amplification technology, converts an incoming signal into a series of rectangular waves of the same frequency. The width of the rectangles changes over time, this waveform is much easier to mount. The main advantage of PWM amplifiers is their extremely high efficiency (> 90%). The result is a much lower temperature, which makes the use of heat sinks unnecessary.

We listened to several different styles of music on the ADAM A8X speakers. We can also report positive and negative experiences. The benefit of the speakers is that they give an extremely detailed sound image, even from different student positions. The instruments sound exceptionally clear, the bass is firm, it fills the whole space. We first listened to Bon Jovi’s popular hit “It’s my life”. The lower ranges sounded flawless, but the instruments playing in the middle and upper ranges seemed to be pushed into the background. The tweeter “whistles” in certain upper ranges, which somewhat degrades the sound image. The musical dvd The Phantom of the Opera came into our hands after that. Great opera arias are also performed in the film, which was a success with the portrayal of Gerard Butler and Emmy Rossum. Our impression here was similar to the previous ones. The deeper voices were impeccable in this case as well, but the female soprano voices and mid-range instruments and vocals were less pronounced. The sound effects, on the other hand, felt definite, creating a real feel. While playing Metallica’s track “Enter Sandman,” we encountered this bug again, the guitars quite simply becoming side actors.

The A8X features a modern speaker with clear and understandable sound, although after hours of listening, we already felt some “ear fatigue.” It is popularly used by professional sound engineers for sound recording and sound mixing purposes, so we can’t call it a bad speaker. However, it is important to note that in a room with an ideal acoustics, the speaker pair will certainly perform more convincingly. We tested it in a rudimentary studio made up of a basement room, so we think this may have contributed to the negative assessment as well.

-Ports on the front

-Can be placed both vertically and horizontally