While testing the Canadian company’s product, the MRX 710 AV receiver, we arrived at a well-appointed movie room. We’ve tested Anthem amps before (Anthem MRX 1120 and Anthem AVM60) so we weren’t unfamiliar with the brand.

The MRX 710 AV receiver is a clean, simple-looking device with a black aluminum front panel. Since it also has a remote control, there was no need to place too many buttons on the front panel, as we control everything with the remote control anyway. It weighs 14 kg. On the left side there are some controls for navigation, as well as an openable cover that hides a headphone jack and an extra HDMI input. 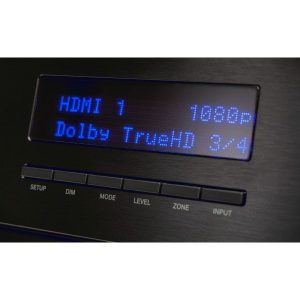 In the middle of the front panel there is a large blue LED display that can be seen from a distance. Below the display, you can discover a few buttons to adjust the brightness of the display, select the mode, adjust the level, set zone 2, and select the inputs. The amplifier supports 20 virtual inputs, we can switch between them with the remote control. On the right is the high volume control knob and two power switches. Equipped with 8 HDMI 1.4a inputs, the MRX 710 also has two HDMI 1.4a outputs on the rear panel. HDMI connections support 3D and ARC functions, they can also receive 4K signals.

There is a colour-coded digital socket on the back. With the Ethernet connection, IP control has become possible, the ARC -Anthem Room Correction system can also be run through this, updates can also be performed via a USB connection. The rear panel of the amplifier has a 7.1 channel preamplifier output and surround back outputs that can be used as a stereo output in Zone 2 and to drive the front speakers for dual amplification. There are also stereo analog inputs, IR (infrared) input and output, 12 Volt output, RS232 connection, and an FM / AM radio antenna connector.

The remote control is easy to see, the layout of the buttons is also ideal, the backlight is useful when used in a darkened room.

The menu system is very clear, quick and easy to adjust. Do not look for DTS Neo: X support on this model, as the top, wide and high front speaker outputs are also missing. It has an FM / AM radio receiver, but not an Internet radio function. We cannot connect external USB devices to the amplifier either, but these are not such major shortcomings. For radios, the most important requirements are to have a clear adjustment system and sound great. Its circuitry and signal processing system are excellent.

It has a digital signal processing unit -DSP- which allows the ARC, room correction system to apply more filters and thus program setup is faster and easier.

Keep in mind, however, that room correction systems can only improve under perfect acoustic conditions. This is because equalizer programs measure sound pressure and make corrections based on it. However, if there are acoustic faults and echo problems in the given room, they cannot be corrected by the room correction system, on the contrary! Because it also treats reverberation problems or reflections as a sound pressure problem, it reduces the sound pressure instead of correcting real errors, making the sound even worse.

Although more advanced DCR programs already calibrate phase and pulse transmission, which improves the clarity and dynamics of sounds, they are not enough in themselves. This is why it is recommended to treat walls, ceilings, windows and floor surfaces with acoustic panels and fabrics, as if the room has perfect acoustics, we can further improve the sound with minor adjustments with equalizer programs. The manufacturer also comes with a measuring microphone for the ARC system, along with a tripod microphone stand, as well as a CD with an ARC calibration system, a USB cable for connecting the microphone and the amplifier, and a CAT5 cable for network connection to the receiver. 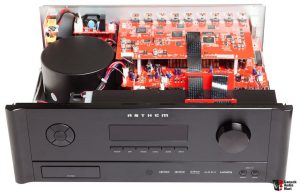 Testing of the Anthem amplifier could be performed in an acoustically optimally treated room. Diffuser front panels and sound-absorbing elements on the walls ensure the right sound. As a result of our measurements, we recommended the treatment of floor surfaces with sound-absorbing acoustic mats, which are able to absorb 20-30 decibels of sound compared to traditional mats.

We watched a very fresh movie to test the sound of the amp. Exciting scenes from the 2020 action, Tenet, a sci-fi movie with plenty of sound effects. Despite the simplicity of Anthem, it came as a very pleasant surprise. We paired the amplifier with a pair of Genelec brand speakers. We experienced a realistic, spacious sound, a wide stage picture and a wealth of details. The deep ones were very firm, tight and percussive. The dialogues were understandable and clear, perhaps the medium ranges were sometimes a little pushed into the background, but the high tones were beautiful and lively, just as much as they needed to.

Anthem receiver knows as much as a receiver needs. Some may find the features incomplete, we would rather recommend other models to them, as there is plenty to get with a device with far more features than the MRX 710 AV. But if someone doesn’t like overcrowding or finds an infinite number of features redundant and wants a clean, intense sound, then this amp is the most ideal for it, simple yet great!