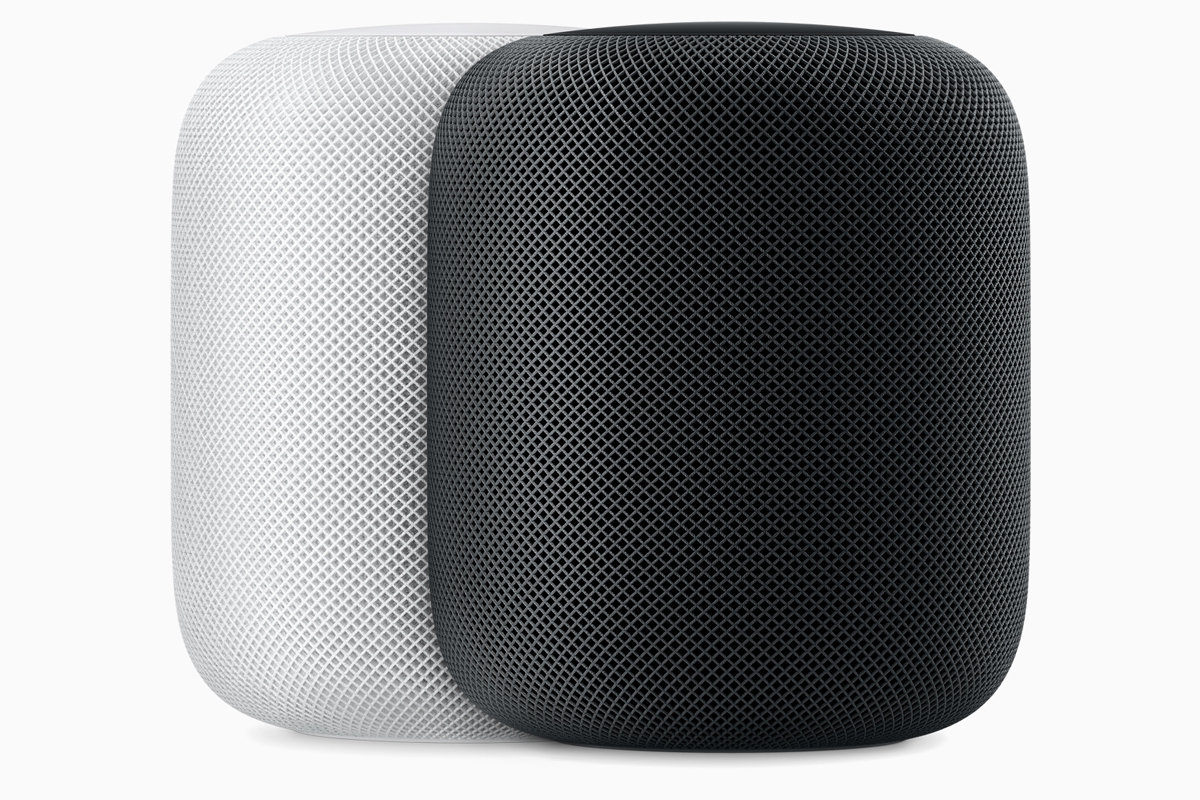 Designed for use with other Apple products, such as the iPhone and Mac devices, the HomePod works with Apple Music. The speaker is available in two colours: white and grey.

There have been quite mixed reviews about the HomePod speaker. On the one hand, they praised its design and sound quality compared to other speakers, but were criticized for its lack of third-party support and its high price compared to other smart speakers. It has also been found that the silicone base on the bottom of the device can sometimes damage wooden surfaces.

Excellent sound quality is provided by the high-performance processor, convenient music playback is possible with the help of Apple Music service, thanks to Siri, the smart assistant, we can also control other elements of smart home. WiFi 802.11ac support with MIMO function is available, HomePod is compatible with Apple AirPlay 2 technology.

The Apple HomePod wireless speaker has a simple yet practical look. But the most important thing about a speaker is the sound. The central bass driver is complemented by seven tweeter drivers that are logically placed on the circular section to ensure high quality playback. In addition, each drive in the Apple HomePod has its own amplifier.

The six microphones provide clear sound, which measures the position of the speaker in the room and adjusts the sound accordingly. All thanks to the powerful Apple A8 processor.

The Apple HomePod wireless speaker uses Siri, the smart assistant, to communicate with the environment. Not only is it suitable for playing music, it also shares current news and weather reports with users, exchanges and calculates exchange rates. Thanks to HomeKit integration, smart home appliances can also be controlled.

Other features of the HomePod

The 172-millimeter-high and 142-millimeter-diameter HomePod has a single cord, no optical input, and a jack that can be found on rivals, for example. It doesn’t have a Bluetooth connection either, but it does have Bluetooth 5.0, so you can only send music to your speaker from an Apple device. Its cylindrical housing is covered with fabric. At the top is a touch panel, where you can adjust the volume, turn off or select music, and activate Siri.

At the top is the A8 processor that runs the “Hey Siri”. Below it was the deep-center radiator. There are 6 microphones and then 7 high, mid-high speakers on the bottom half of the device. Thanks to modern technology, it detects its surroundings and determines its spatial location, the A8 chip drives the software responsible for sound radiation and echo cancellation.

The A8 chip is able to detect changes in a matter of seconds based on the emitted and reflected sound waves, and the device responds almost instantly by generating waves of varying intensity, providing excellent sound quality anywhere in the room.

The HomePod can be placed anywhere, it automatically measures the room and makes settings to get the best possible sound. Don’t expect a wide stage picture from this speaker, but it is capable of vivid and clear sounds. The music fills the space evenly everywhere, so we hear the music the same way at the farthest points. Siri can hear us even when we are far away or just listening to music out loud.

The HomePod cannot be installed or configured without an iOS device. This means that you need an iPhone or iPad with iOS 11.2.5 or later to connect to your local Wi-Fi network.

The Siri assistant can’t be said to be overly smart, even stupider compared to the iPhone. As long as we just want to control our music or our HomeKit devices, there’s no problem

You can use the HomePod to control your HomeKit devices, but this feature also has its limitations. For example, there are no configurable routine actions like at Amazon.

In order for the speakers to sound good, it is essential to improve the acoustics of the rooms. The HomePod was tested in a smaller room where the sound is not yet real. Some bass sound dampening panels with wood membranes have been placed on the walls, but a few more diffusers will be needed for perfect acoustics. Diffusers should be placed at the primary reflection points in order to scatter the sounds evenly in all directions in space. By focusing only on sound absorption, we can over-attenuate the room, resulting in an unpleasant sound.

Compared to other speakers of similar price and category, the HomePod’s sound far outperforms its competitors. It also beats similar types of products from other brands in terms of the sound image that fills the room. The high ranges were great, the deep tones were intense and loud, powerful enough. It provided a realistic and clean product. The sound was surprisingly rich in detail, with each instrument well separated.

Unfortunately, however, the HomePod also has its drawbacks. One is its rather tiny size, which is a pretty big downside in terms of sound. The jack, optical input and Bluetooth connection are very lacking, as it cannot be connected to a TV or turntable. This is a serious shortcoming.

It seems a lot heavier than it looks, and that’s because it has a lot of speakers. It comes with 1 subwoofer and 7 tweeters, each with its own amplifier, and the device is also equipped with six microphones.

As mentioned earlier, the Apple HomePod can leave a white mark when placed on more expensive wood surfaces. It doesn’t matter where you place the speaker, as vibration at deeper bass can be a problem between the silicone base and the wood. Maybe it’s best to place it against the wall so you can enjoy the wide sound space. At times, the sound seemed a bit noisy, but it still provides the best sounds compared to similar speakers. The Amazon Echo, or Sonos One, is much easier to integrate and set up, but their sound lags behind the Apple HomePod.

Thanks to AirPlay 2, you can connect two HomePods to get stereo sound, or add speakers from other brands. Examples of AirPlay 2-compatible speakers include Sonos Playbase, Sonos Beam, the Sonos One (these speakers we’ve tested before) and Sonos Play: 5 , as well as Bang & Olufsen, Libratone, and Naim speakers.

Among the smart speakers, this speaker stands out in terms of sound quality. We had surprising detail, powerful bass and clear, vibrant highs. It fills the room nicely. Unfortunately, Apple has limited its use and only works with iOs. It can’t be connected to a TV or music player. The stereo sound wasn’t good either, and the HomePod was disappointing in this area. We experienced a delay between the sounds of the 2 speakers, so the device had to be stopped again and restarted several times.