The British company Cambridge Audio has been striving since 1968 to develop audio devices that meet the needs of hi-fi fans. They set out to produce reliable, high-quality but simple and affordable products. Their most important “mission” is to get the great British sound to everyone. We will find out how successful this mission is after testing. 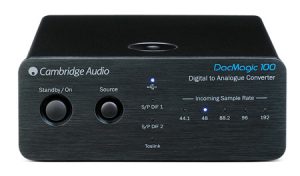 Primarily computers, media and Blu-ray players, digital resources… etc. the sound quality is improved by the Cambridge converter. The Dacmagic 100 Wolfson WM8742 24 bit DAC guarantees excellent hi-fi sound quality. It also has 24 bit / 96 kHz USB audio, 1 digital Toslink and 2 digital coaxial and Phono inputs and RCA analog outputs. The front of the metal housing is made of brushed aluminum. The front panel contains the on and off, source selector and filter control buttons. The device supports operating systems that do not require separate software installation (Win / Mac / Linux) and is also capable of 16/24-bit, 44.1-192 kHz program support. 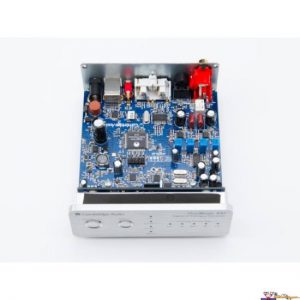 It is powered by a large external adapter. The frequency response is 20 Hz-20 kHz, the Dacmagic weighs 0.5 kg. The USB connection is asynchronous. It can also be placed vertically, with a rubber rim provided by the manufacturer.

Some features are missing 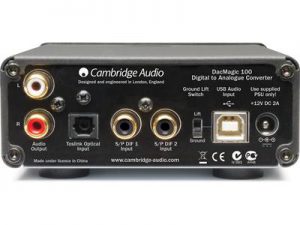 There is no headphone amplifier, no Bluetooth connection, no choice of digital filters during production. There is no balanced analog audio output on the back of the device, the number of digital inputs has been halved compared to the Dacmagic 100 Plus model. The decrease in the number of features was compensated by the much more favorable price.

What are DAC converters good for?

The DAC converts digital signals to analog signals. Conventional amplifiers cannot handle digital sources. If you want to listen to digital music, a DAC circuit is essential. In audio devices, older DACs are not always capable of transmitting the original audio properly. Due to lower quality DAC converters, audio playback will be noisy. Another negative consequence of improperly designed circuits is digital timing problems. Of course, it doesn’t matter what the quality of the source is. If you feel / hear that you are not getting the sound you expect, you may want to purchase a separate DAC converter. 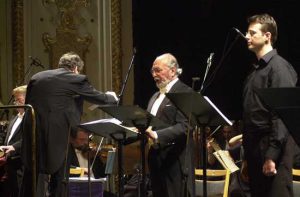 We first listened to the overture to Rossini’s four-act opera Tell William. The converter produced clear, vibrant and natural sound with vivid, extended treble. Perhaps the sounds could have been a little airier, thicker. The fierce gallop was followed by Gerschwin’s song Summertime in Porgy and Bess’s three-act opera. The vocals sounded wonderful, clear, but the instruments were somewhat pushed into the background. However, the dynamics and accuracy were impressive. In our previous tests, we have already experienced better, closer, more lifelike sound for other audio devices, but the Cambridge converter has also approached perfection. A French musical CD by Romeo and Juliet, written by Gerard Presgurvic, followed. We could hear excellent stereo sound. We experienced a really real, original effect in the musical version of the two young people’s tragic love stories, overall we heard an extremely complex, perhaps overly concentrated sound. Here, too, the band was somewhat suppressed by vocals.

Benefits of the Cambridge Dacmagic 100

Is your performance really magical?

We found the performance of the device convincing. Ideal for improving the sound of media and Blu-ray players, it can be an optimal accessory for Pc, Mac devices. There are few competitors in the DAC converters in this price range.