We have tested the Definitive Technology D15 tower speakers!

We have tested the Definitive Technology D15 tower speakers!

Definitive Technology launched its “Demand” series speakers with three different bookshelf speakers back in late 2017. Two and a half years later, they finally expanded their demand range with two floor-standing and a center speaker with the D15, D17 and D5C speakers. The difference between the two floor-standing speakers is that the D17 uses slightly larger drives, which should give a slightly larger bass extension and a slightly more dynamic range.

There are two main differences between the BP-9000 and Demand product families. One difference is that the BP-9000 series uses a bipolar design where the sound comes from the back of the speaker. This results in a sound that has reflections. Another difference is that the BP-9000 series uses built-in subwoofers. This reduces the load from the external amplifier. With the proliferation and flexibility of powerful and affordable subwoofers, built-in subwoofers are more designed for those who don’t want to provide space for separate speakers.

In comparison, the Demand series has a much more traditional speaker design. More acoustically predictable speakers with finer imaging and a wider front sound field. So while Definitive Technology has two different series that occupy a similar price range, they are still quite different.

Let’s focus on the Demand D15 itself. They are certainly not cheap, but they are not extra expensive either. It has a simpler speaker design than Definitive Technology’s other floor-standing speakers, and if that simplicity doesn’t go to the detriment of higher quality. 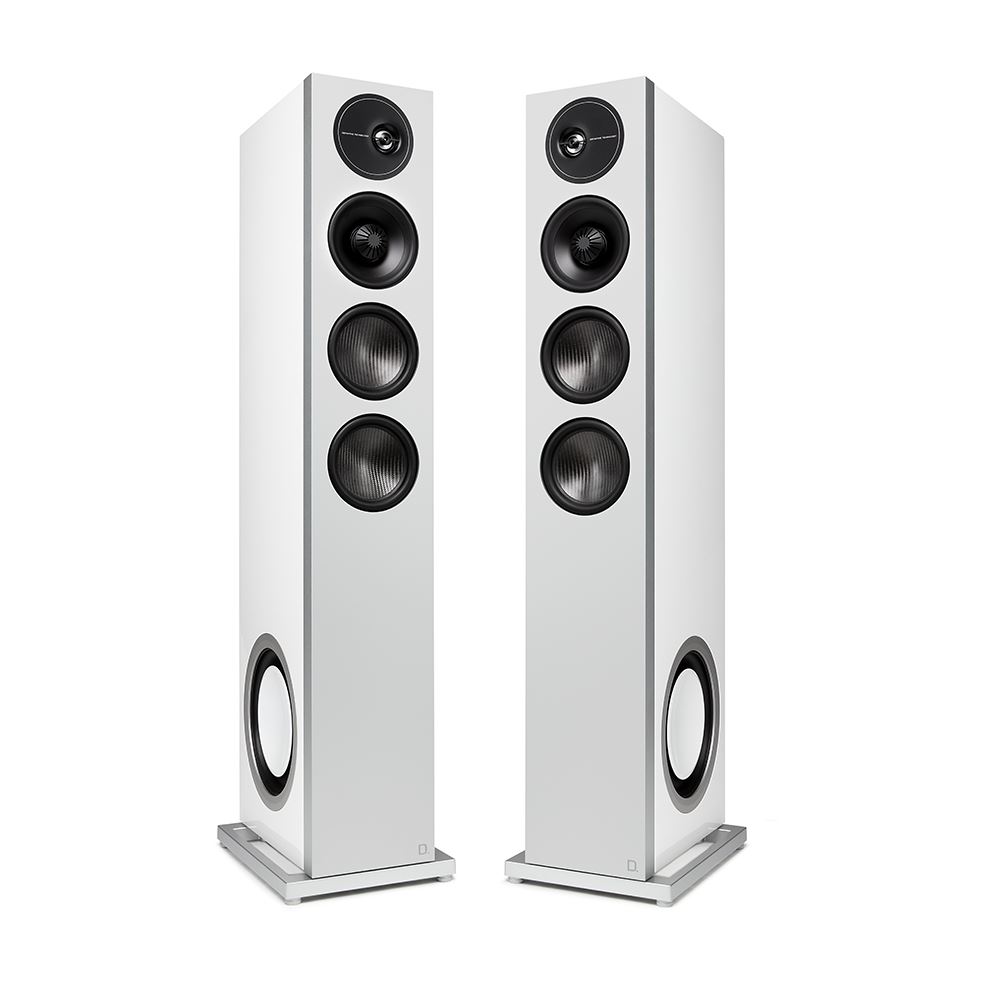 Metal feet must be attached to the bottom of the D15 speakers, but this operation takes less than 5 minutes. The D15 has a strikingly modern design. The box-like nature of the cabinet is not alleviated by the rounding of the corner at all, in fact, the right angles are retained. The all-aluminum front baffle is a very attractive and high-end element.

For those who want a solid look, the grille front baffle can be hidden with a light-silver material, giving the speaker a much more minimalist look. The grille is magnetically attached, so there are no screws that would disfigure the appearance of the front baffle. With a glossy white finish (also available with a glossy black finish), the grille for the D15 is so minimalist that it looks almost like an abstract work of art. Usually, the grids make the speakers look boring, but that’s not the case here. 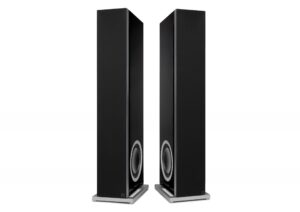 There are passive radiators on both sides of the speaker that have a bright white cone. The tweeter is partially obscured by an aluminum dome on a large black front panel. It looks like a side-facing eye. The mid-range drive has a high-phase connector used by Definitive Technology on previous models. The carbon fiber cone gives the bass drives an elegant look. The Gloss White design is suitable for all brightly coloured decorations. Overall, the Demand D15 speakers are very nice.

The Definitive Technology Demand D15 speakers are three-way, tower loudspeakers that use passive radiators to increase low frequencies. The frequency response is 39 Hz to 24,000 Hz, the nominal impedance is 8 ohms, it weighs 23.59 kg, and its dimensions are 103.58 cm x 22.99 cm x 32.66 cm. Available in glossy black and glossy white.

The D15 tweeters use an aluminum dome mounted in a waveguide. The aluminum in the dome of the tweeter is softened, which means that it is softened by approaching the melting point of the aluminum and then slowly cooled. This process dissolves the crystalline structure of the metal and becomes softer as it recrystallizes. In its softer state, it enhances attenuation, which can tame bounces at higher frequencies. This will give you a smoother sound. There is a piece of plastic that partially covers the front of the tweeter, it is a phase lens that Definitive Technology calls “20/20 Wave Alignment Lens”. It can also protect the fragile membrane of the tweeter dome.

The mid-range drive is made of polypropylene, which is quite unique, Definitive Technology calls it the “BDSS Subwoofer,” which stands for “Balanced Double Surround System”. According to the manufacturer, this dual three-dimensional system allows for a larger linear deviation. This is called a “linear response waveguide,” although it certainly does not function as a traditional waveguide. 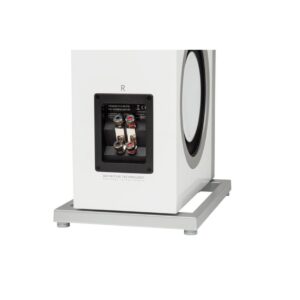 The D15 has two types of five-way nickel-plated connectors for those who want to connect two amplifiers to the speakers. Most high-end speakers have this capability, but it is not very useful in practice. The benefits of bidirectional wiring or amplification of such speakers are negligible. All this technology is in a very simple MDF cabinet with the aforementioned aluminum front baffle with a thickness of 6 mm. The side panels and stiffeners are all 18 mm, and the stiffeners have been designed and placed by FEA analysis for optimal cabinet rigidity. The center range is locked in its own heavily attenuated compartment in the speaker housing. A good amount of filling is placed in the cabinet for internal damping. The cabinet is solid and stable.

The Demand D15 speakers are well-designed and beautiful speakers, but like any other high-end speaker, the ultimate goal is good sound.

It is a good idea to adjust the speakers so that the distance between the rear wall and the side wall and the distance between the speakers and the listening position are optimal. The speakers are designed to radiate directly toward the listening position. The listening distance of the speakers was about 2.5 -3 meters. The associated amplifier was Anthem AVM 60. No room correction settings were used. The testing took place in a fairly large cinema room with excellent acoustics. Thanks to the sound-absorbing panels and diffusers on the ceiling and walls, the sound was absolutely ideal. The floor was completely covered with carpet, which, along with the blackout curtains, also perfected the acoustics of the room.

We started the musical test with Johann Strauss Jr.’s Imperial Circulation. We experienced a wide stage picture and every instrumental detail was easily separable. From the first sounds, the sound was stunning. Each piece of music was separate and crystal clear. The strings, wind instruments, brass instruments and percussion instruments sounded as vivid as if the band had played right in front of us. Of course, the sound quality also depends on the recording, so not only is the merit of the speakers a remarkable production, but there is no doubt that the D15 speakers allow an exceptional recording to take full advantage of the possibilities. The next test subject was the band Clean Bandit, listening to the song Tears. The tone balance between vocals and instruments seemed to be very good. The stage was extensive and all the instrumental parts stood out. The vocal parts were very well delineated. The bass was well directed, with a large extension that easily covered the lower frequencies 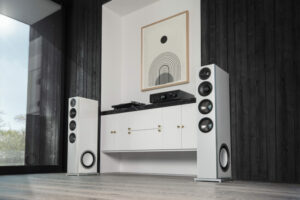 The tower speaker delivered exceptional performance, although Definitive Technology was overly optimistic about the impedance specification, but that doesn’t mean the D15’s electrical load would be bad, but rather not exactly as much as the manufacturer suggests. These speakers can deliver great sound, but they can’t be insanely loud, so those who want a louder product should choose a different speaker.

Let’s move on to the benefits of the loudspeakers: First and foremost is the sound: these speakers sound fantastic. They are balanced, accurate, detailed and deliver amazing sound. They have a good bass extension up to 40 Hz and a large dynamic range. They sounded great in every style of music we tried. The only time we weren’t maximally satisfied was while watching a movie when the basses weren’t the most perfect. But it was precisely for the optimal transmission of the lowest bass that the designers created the subwoofers.

They are very beautiful and although they are not cheap speakers, they are still worth the money. But the appearance is not everything, because the quality is also very good. The manufacturer has created a really good speaker for the Demand D15.