We have tested the Denon AVR-X2600H amplifier before, so we were interested to see what impressed us the newer AVR-X3600 H. Compared to its predecessor, this amplifier got new features and took on extra weight, the price is relatively affordable.

The housing has a solid, clean, aesthetic appearance, it seems that premium quality raw materials have been used in its production. The 12.1 kg audio front panel features a large white LCD display on the metal front, with easy-to-see and far-away letters in ideal size. Use the left scroll key to select the sources, the right scroll key to adjust the volume, the other keys are rectangular.

The front panel has 1 digital HDMI, 1 analog composite video, RCA and USB inputs, as well as headphone and built-in microphone jacks. The rear panel features 11 pairs of speaker outputs, a wired Ethernet port, an FM / Am antenna, a 12 V trigger, and RS-232 connectors. Naturally, digital HDMI and analog composite and component video inputs and outputs, as well as stereo RCA and moving magnetic phono inputs, were not forgotten in the design. The device also has LAN, Wifi and Bluetooth connections. The sockets can also accept banana plugs and bare cables. The many connectors are arranged transparently. The 32-bit AKM AK4458 / VN digital-to-analog converter is capable of decoding music files without loss, and can also play FLAC, WAV, 24 bit / 192 kHz, 2.8 15.6 MHz DSD files. The IR (infrared) remote control is equipped with medium-sized, beautifully arranged, color-coded, soft buttons. Unfortunately, the remote control was not backlit, only the two buttons on the top (Main, Zone2) are lit. 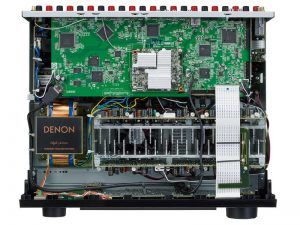 Setting up the Denon amplifier is extremely simple and quick, we managed to set it up and set it up in about 15 minutes. Together with a pair of Genelec 8050A studio monitors, we tried the AVR-X3600 H small. We tested in a 20-square-foot living room with sound-absorbing and diffuser panels on the walls and sound-absorbing curtains in front of the windows to optimize the sound of the home theater system. We launched the film test by screening a tense, depressing and creepy American thriller, Shutter Island. The protagonist, the great Leonardo DiCaprio, the film was shown in cinemas in 2010. The Denon AVR-X3600 H delivers dynamic, accurate and clear sound with a 3D, lifelike effect. The dialogues were clear and understood. We were also pleased with the sound of the 2019 action comedy Men in Black – International, even at high volume we experienced clear and natural sounds. The sounds surrounded us, providing a realistic, accurate dynamic experience for the amp and speaker pair. In conclusion, we continued the rehearsal with listening to music. The theme song of the fantasy series Game of the Thrones was played. All the provinces spoke nicely, pleasantly, the Denon showed great performance, although the stereo sound was far from perfect! Compared to the Marantz amplifier, the AVR-XA3600 H produced clearly weaker stereo sound, which was most noticeable at high tones, the music was less detailed and natural than we would have expected. (However, to protect Denon’s mid-range amp, we have to mention that the Marantz amp is much more expensive!)

The Denon AVR-X3600H amplifier is made of high quality materials and is an attractive looking audio device. It has a several of features and supports the latest video technologies. It provides a clean, surround sound and is reasonably priced. However, stereo sound is not the “strength” of this amplifier. In our opinion, the stereo is weaker, less natural and not detailed enough, but in this price range, the Denon AVR-X3600H is the champion for the time being!