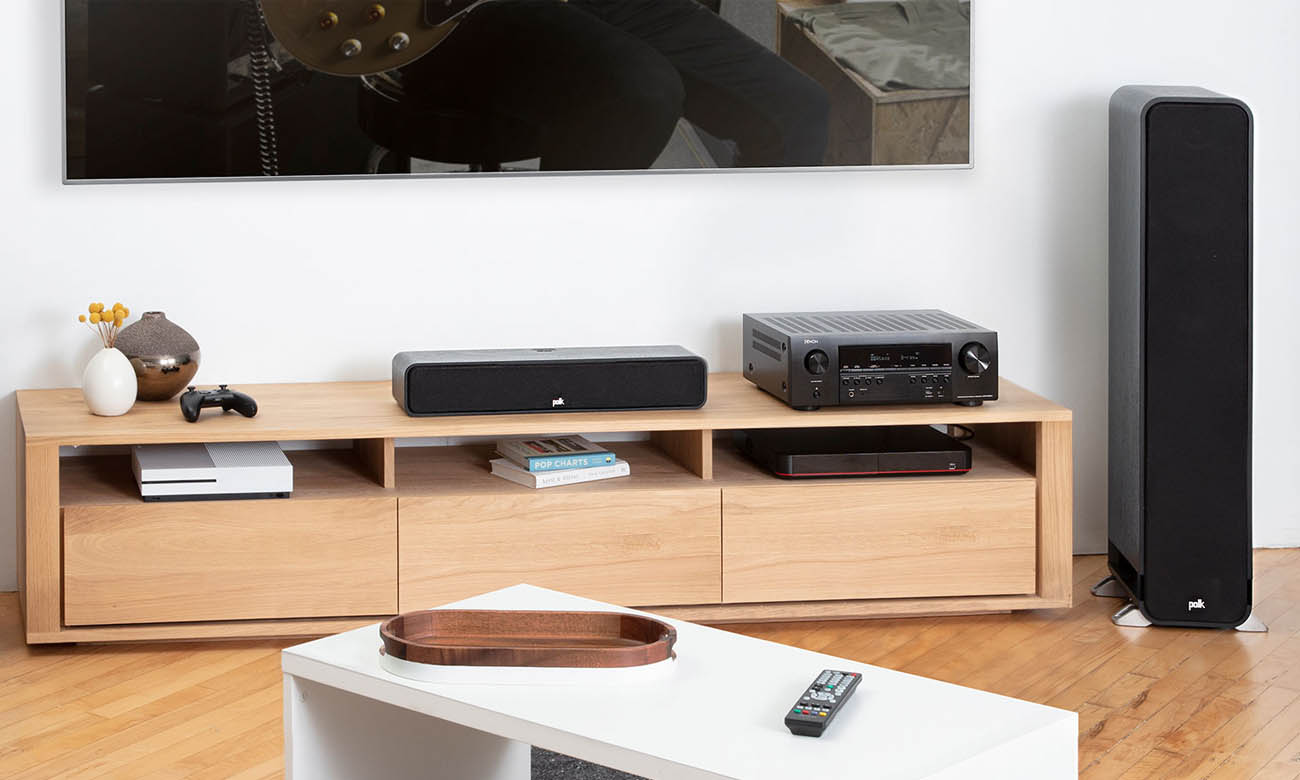 The Denon brand is already familiar to us, we have tested Denon amplifier before. The AVR-S750H is a 7.2-channel, 4k Ultra HD AV receiver home theater amplifier with 165 watts of gain per channel. In this way, we can expect a balanced, identical quality on all 7 channels. 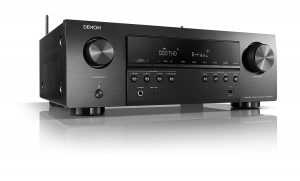 Its chunky black box has a large display and handy source buttons. The user interface is not very decorative, the appearance of the amplifier seems a bit outdated compared to its competitors (e.g. Sony). It has 6 x 4 K / HDR compatible HDMI inputs (1 on the front panel), 1 output and Ethernet, USB, Bluetooth, Wifi connections. There are 3 digital inputs-2 optical and 2 coaxial devices. Audyssey Room Correction software and its measuring microphone measure and calibrate all speakers. Play vinyl records on the Phono input.

The speaker connections are colour coded. It is also capable of 24-bit / 192 kHz and DSD playback. Supports the latest video formats. The Exclusive Denon Setup Assistant helps with setup, and can also be controlled with a Smart TV remote control via the Smart TV HDMI CEC function. With built-in HEOS technology, you can stream music from anywhere and sound the same in every room. 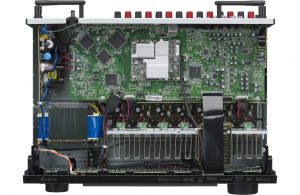 The device has almost everything it needs to….

Unfortunately, the AVR-S750H does not have Google Chromecast support, unlike some of its rivals. (example: Sony) This is a disadvantage for Android users. Spotify Premium users can stream their favourite music thanks to Denon Spotify Connect, as well as Apple Music and Air Play 2. You can also control the volume, on and off, source selector and volume control from your Android and iOS smartphone. It is also compatible with Amazon Alexa, Google Assistant and Apple Siri voice assistants.

We tested the amplifier

The 10.5 kg Denon amplifier was tested in a room of approximately 25 square meters. The acoustics still need to be improved in the room by placing some diffuser panels. We first started testing with a Blu-Ray quality action dvd.

The sounds of Alita, Battle Angel, sounded crisp, balanced, and the 3D effect was amazing. A little sometimes we heard the deeper ranges “smeared”.

In 2018, we saw The Equalizer 2. thriller starring Denzel Washington in cinemas. Denon and its associated KRK Rokit speakers worked well together. We were happy with the high and mid ranges, the dialogues were understandable, clear, but again, we noticed some noise in the bass sounds with the sound effects. The 3D sound, on the other hand, was really fantastic, the sounds surrounded it, the space was nicely filled.

The legendary band’s concert film U2 – Experience-Live from Berlin followed. The amp realistically returned the concert experience. It felt like we were in Berlin, among the raging audience. The instruments were separable, but at higher volumes, the clarity of the bass left something to be desired. Sometimes the deep range seemed dull.

The phono input also allows you to listen to vinyl records, so this time the vinyl album of Boney M Oceans of Fantasy was added to the turntable. The retro sense of life was conveyed in an absolutely lifelike way by the amplifying, clear and beautiful sound of our experience, although the lower ranges were unfortunately not perfect.

There are several benefits to the Denon AVR-S750H amplifier, one of which is the affordable price. Bluetooth, Apple AirPlay 2, Denon’s own HEOS feature, and Amazon Alexa, Google Assistant voice control apps are clearly in favor of the amplifier. The appearance of others did not like me so much. It seems boring, outdated compared to similar devices from competitors. His predecessor performed slightly better in terms of sound, with problems in the bass ranges the most. The lack of a Chromecast should also be mentioned as a negative. We recommend it mostly for medium-sized rooms and rooms. Don’t forget about acoustic treatment. Choosing the right speakers also matters a lot in terms of sound. We recommend the Denon AVR-S750 H amplifier, although if you want a more powerful percussion bass, choose another brand in this price range.