After unpacking the Dune HD Pro 4K media player packaged in a white cardboard box, you will find the media player itself with its detachable antennas, power supply, HDMI cable, backlit remote control, operating instructions and 2xAAA battery for the remote control. Compared to the previous model, no wall mount kit, A / V jack-> RCA cable and IR extension are included. The SATA cable required to connect the external drive was also missing.

It runs on Google Android operating system and has a storage capacity of 16 GB. The basic features of the media player are Bluetooth connectivity, a memory card reader, and a Wi-Fi connection. The size of the memory RAM is 2 GB. Available in black. The dimensions are 187 mm x 29 mm x 140 mm.

The remote control is included.

What can we use media players for?

Media players are designed to play movies and music on TVs that do not have a DLNA or USB port. With the launch of Smart TVs, which already had an integrated operating system, surfing the Internet and streaming became incredibly easy.

However, not everyone has a smart TV, so after some development, there is still a demand for media players. It is also recommended to use a media player for the best and most expensive Smart TVs, because the playback quality of smart TVs does not match the quality of media players.

The primary function of media players is to be able to play music or video content from another device. This requires a DLNA or HDMI connection. You can also connect the media player to video cameras or still cameras to view images or video content on your TV screen. As the media players are also equipped with USB connections, a flash drive or external hard drive can also be connected to the device. They also play standard video formats, but are also capable of handling more modern formats.

You can also access the Internet via television via Ethernet cable or Wifi. The HDMI connectors are only for transferring images, you cannot connect to the Internet through them, only with the media player.

The media player runs on an Android operating system, and the quad-core Realtek RTD1295 media processor delivers high-performance video playback. With 2GB of DDR3 RAM and 16GB of ROM, overall performance is excellent. Unfortunately, the new model does not include a video processor like the VXP in its predecessor, the Solo 4K.

4K and HDR are also supported, as is HD audio bitstream (Dolby ATMOS, DTS X), automatic frame rate and resolution switching. You also have the option to organize your collection of movies in the “My Collection” feature. They promise full Blu-ray support for the future as the device will be upgraded with a firmware update. 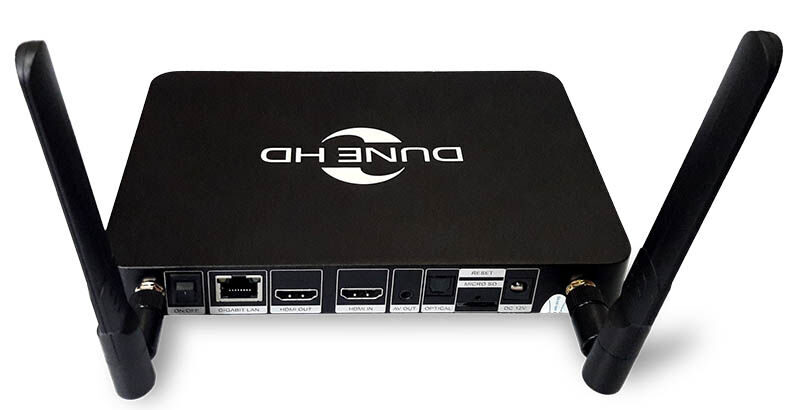 The aluminum housing of the Dune HD model represents an elegant design and betrays premium quality. There is a large logo on the top of the black housing. The remote control is large but very comfortable and handy. It has a handy numeric keypad and dedicated keys for all key functions, such as volume control, menu, setting, sound and subtitle selection, pause, play, fast forward and chapter skip.

The biggest advantage is the backlight of the remote control, which can be switched on with a separate button in the upper left corner. The dim, subtle orange light helps distinguish each button in a dim or darkened room. IR based but the range is still very good.

Although this media player is an Android device, the manufacturer’s software engineers have managed to provide a standalone player user interface, which is much more user-friendly than the Android media players known so far.
There are many themes and customization options to choose from during the settings. You can also load your own custom themes. Thanks to the new quad-core processor, browsing menus is faster and much smoother.

New menu items have been added to the player. Some of the Android apps are pre-installed and more can be added through the Aptoide Store.
The setup menu is exactly as we used to with previous Dune players. In terms of settings, the brand has always been impressive, so we won’t be disappointed in this area either.

During the production of the HD Pro 4K, Dune switched from SIGMA SoC to Realtek for better playback quality.

An approx. We tested the media player in a 20-square-foot living room where acoustic treatment had not yet taken place. According to our measurements, the room is quite echoing, so we recommended that the customer place membrane sound-absorbing and absorption panels with diffuser on both the walls and the ceiling in order to the echo cancellation. We recommended leather membrane bass traps behind the speakers and in the corners.

It is very important to deal with the acoustic management of the rooms, because the sound quality of video content and music materials can only be adequate if the acoustics are optimal. The walls and the ceiling reflect the sounds, just like the windows, so unpleasant echoes can occur, leading to a deterioration of the sound. So don’t take care of room acoustics, choose professional acoustics and products!

Playing music files (mp3 / flac) was trouble-free, we can’t make any criticisms or complaints about it.
However, our experience with video playback performance is less clear. The basic firmware is quite sufficient. The default player selection ensures that even the highest bit rate 4K / HDR content is played in perfect quality.

We get both automatic frame switching and automatic resolution switching, proper 23,976 motion control and HD Audio bitstream, including the latest Dolby ATMOS and DTS X codec.

The only thing we missed about the perfect experience is the support for full Blu Ray / UHD menus. Fortunately, the manufacturer has promised that this will be supported in future firmware updates. It supports ISO (including UHD) and Blu Ray folder playback, although we found that sometimes BD folders were not recognized properly and could not be played back automatically.

It would be mentioned that the internal player is not the default Realtek player, but a completely new type redesigned by Dune and Realtek. The picture quality is fantastic, although we have sometimes encountered a Realtek 4K bandwidth error, but this can be easily prevented by manually selecting 4K@23.976, 12-bit and 4: 2: 2 video options.

What is missing from the previous model (Solo 4K) is the VXP image processor. It doesn’t really need Blu Ray and UHD content, but it did a very good job of repairing SD materials, especially DVDs. The heyday of DVDs is over, but those who have a collection of DVDs get a better picture with older media players.

However, there are also innovations that compensate for any shortcomings compared to previous models. Perhaps the most important thing was to get a full license (Widevine DRM L1) for You-Tube and DRM video streaming content like Netflix. Both are capable of 4K resolution. It is the first high-end media player that does not use the official Android TV user interface. With this, Pro 4K is unique in that the user does not need to have a separate device to play high-end video files and 4K Netflix. We hope to have a 5.1 sound for Netflix in a future firmware update, as it is now limited to stereo sound.

The HDMI In application does not support recording functions for some incomprehensible reason.
The performance of the wired LAN was amazing as we did not experience any signs of buffering or network skipping. The wireless performance was also very good as the 802.11ac Dual Band 2T2R module can handle 1080p remux files.

To download the information, you need to properly arrange your movie collection on your hard drive. This requires a single Movie (or Movies) folder, in which each movie has a separate folder, and the folder or video file name contains the full title of the movie to avoid possible title conflicts.
The Pro 4K uses the same scraper previously used in the Solo 4K.

The result is stunning and really precise. There is a lot of information about each film, such as the synopsis, interesting information about the main characters / directors / crew, and we can also watch previews related to the films.

The default file manager also has an integrated auto-recognition feature that works well if the folder name makes it easier for the scraper to analyze.

The Dune user interface is based on an Android 7.1 based operating system. The usual Android menu can only be seen during settings by selecting the “system” menu item. Previously, it wasn’t possible to add existing (or new) Google Accounts. However, thanks to the latest FW updates, the Google Play Store is now available. The impact of the Android OS has been minimized, ensuring seamless, high-quality video and audio playback. This is important because updating applications in the background can really degrade playback stability (for example, by limiting network bandwidth, etc.)

Dune has an alternative store, the Aptoide TV Market, within which you can find almost all the known apps.

However, browsing with Google Chrome is a challenge if you only use the player’s remote. Some settings require you to switch to mouse mode, and inserting web addresses using the on-screen keyboard is not the best solution. So far, the Dune HD Pro 4K has been the only Android-based media player that couldn’t properly recognize the Logitech K400 keyboard / mouse combination. However, it can work well with other types of devices.

Switching to Realtek’s SoC and Android operating systems was a lot of courage on the part of Dune, which ended up pretty good. Compared to its predecessors, we only miss the VXP processor and SD upscaling capabilities. Support for the full Blu Ray menu has not yet been realized, but the manufacturer has promised to expect it in the future.

The user interface looks great, the backlit remote is superb, and 4K You-Tube and Netflix support is adequate. Android 7.1 provides access to all the latest APIs.

Denon AVR-X1700H Review by a Beginner Pen. A layman my cinema guest tested the Denon AVR-X1700H: So life has brought me so much that when the pandemic started, I suddenly had a lot of extra Read more…

Magnat Monitor Supreme 2002 test The German brand Magnat was founded in 1973 by Rainer Haas. The success of this worldwide company is due to the continuous development of its products and technology. Sleek looks Read more…