The French company, formerly known as JMlaB, was founded in 1979 by Jacques Mahul, an engineer and hifi-audio journalist. Since then, manufacturers have been striving to produce the most perfect and clearest sound possible, combined with a modern, youthful and aesthetic exterior design. 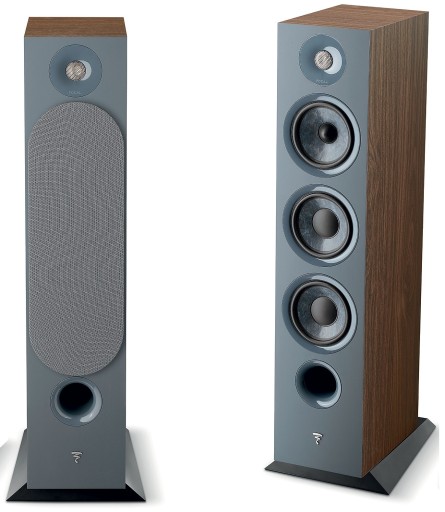 The predecessor of the Focal Chora type was the Focal Chorus, which was further developed and thus the Chora series, which consists of three members, was created, the 826 standing speakers being the largest member of this series. For a 3-way speaker, the recommended amplifier power is between 140 and 250 Watt, with a frequency transmission of 48Hz-28kHz. The speaker weighs 24 kg and is around 1 meter high. Despite its bulky size, the designers dreamed of a robust effect, an extremely beautiful shape and an aesthetic, slim appearance. Available in 3 colours, the light wood housing has a beige front, the walnut has a blue, and the black has a black lacquer front. 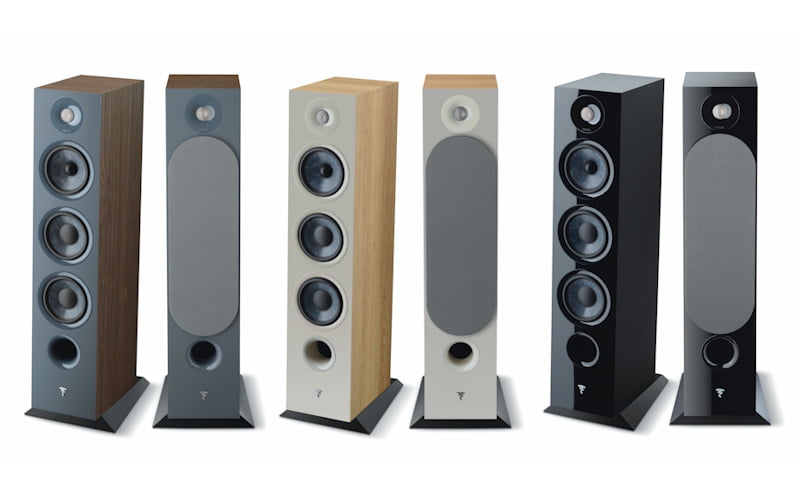 It is equipped with an integrated 13 cm Atmos speaker, a 165 mm center speaker, and two 165 mm subwoofers. The inverted TNF dome is a tweeter made of a composition of 25 mm aluminum and magnesium and is protected by other fixed gratings. The middle part is covered with a densely woven fabric, the frame of which is fixed with a magnet. there is a round reflex opening in the lower half of the front panel, the speaker housing is approx. 5 degrees backwards Due to its soles, it is designed to stand stably on the floor and even minimize resonances. On the back of the speaker are various connections that can primarily accept banana plugs. The banana cork caps are pretty hard to remove, they fit so tightly. The rigid MDF housing also reduces resonances, with a speaker sensitivity of 91 decibels, which means it works well even with lower power amplifiers. The tilted design of the speaker allows for more precise control of the tweeters, as it is very important that they radiate towards the listening position. Because the bass reflex holes are located on the front panel, the speakers can be placed close to the wall.

What is an innovation over previous Focal models is the brand new membrane type, the so-called Slatefiber membrane, made of slate-effect, nonwoven carbon fibers and thermoplastic polymer, which in turn results in greater rigidity, resulting in a more natural sound. The speaker impedance is 8 Ohms.The concave design of the tweeter makes treble less controllable, with the advantage of a special dome suspension for minimal distortion.

The middle and two bass drives are covered by a grid, the tweeters are protected with a shiny steel mesh, but otherwise visible, which is not a problem, because it is really beautiful, the mid-range drive is equipped with a conical dust cover against interference and distortion, the subwoofer received, which provides rigidity and a more caught bass.

We also tried the beautiful beautiful speaker pair while watching movies and listening to music. Testing took place in a 25-square-foot living room. The room is newly renovated and newly furnished in a minimalist style, which in turn is not really conducive to acoustics. Due to the lack of furniture, a lot of bare glass and wall surfaces, there is a lot of reflection, this causes sound problems, so we advised the owner to start acoustic treatment of the room as soon as possible. Diffuser and sound-absorbing panels have been recommended for the walls and ceiling, and thick, densely woven curtains should be placed in front of the rather large windows and the patio door.

A pair of light wooden-colored speakers with a beige front panel were connected to the Arcam SA30 integrated home theater amplifier during the test. Assembling and setting up was fairly simple, we were able to attach the bases to the speaker very quickly and easily. Thanks to the bass reflex openings on the front panel, we can place the speakers relatively close to the wall, but we found that the distance between the two speakers should be very careful, because the sound can be distorted if we put them too close together, as well as if they are too close to the listening position.

These speakers require space, so we recommend relatively larger rooms, choose Chora 826 for rooms of at least 20-25 square meters, if you are looking for a speaker in a smaller room, we would recommend the smaller siblings of Focal Chora. After trying out a few positions, we finally managed to position the speakers ideally about 320 cm apart.

Although the amplifier has EQ adjustment options, it should be noted that room correction systems alone will not yet solve the sound problems of a room with poor acoustics. However, these EQ programs are really great and useful for fine tuning and sound enhancement.

We started the rehearsal with the exciting sci-fi film After Earth, which was screened in 2013 starring Will Smith. The Chora 826 speaker reproduced very beautiful, realistic, detailed and accurate sounds, we could hear full, intense bass, the sounds filled the space. Similar experiences can be reported during the screening of the exciting action film 2006 Miami Vice. Rich mid-range, distortion-free, percussive, deep tones characterized the speaker’s production.

We also wanted to try this beautiful, elegant, yet modern style speaker while listening to music, so we listened the Kygo and Donna Summer’s hit: Hot stuff. No matter how hard we tried to find a grip on the speaker’s performance, it went hard, but we ended up finding a small flaw: the vocals sometimes felt too harsh on the vocal parts. Harder rhythms followed, we experimented with Metallica’s song Until it sleeps. We’ve heard ranges we haven’t noticed before. The guitars and musical instruments sounded distinctively and intelligibly, in detail.

By the way, while listening to music, the stereo stage picture was also perfect, the bass sounds sounded as if we had helped it with a subwoofer. The exact, dynamic sound was there again, and the mid-range was very subtle, soft, yet very rich.

The most prolific member of the Focal Chora series, with its exterior appearance, amazing sound and performance, clearly represents premium quality. We got a realistic stage picture, we could hear clear, accurate, dynamic sound, and we were lucky with an extremely intense, muscular bass range. Whether you want to choose an ideal pair of speakers for your home theater system or listening to music, you won’t be disappointed with the Focal Chora 826.

However, due to its rather high price and large size and weight, it is not available to everyone. For the same reasons, care should also be taken not to place the speakers too close together. It is also important to find the right distance from the student position. Removing the banana cork caps is quite problematic, but no major problems were found when testing the Chora 826.