Focal, a manufacturer of audio and hi-fi products, has produced many excellent products over its 40-year career, and we have tested some Focal speakers before.

The largest member of the Focal Trio series, with 37.3 kg and dimensions of 635x 345 x 405 millimeters, the Trio11 Be Red is an active, reference studio monitor. Its appearance is elegant, clean, the sides of the housing are red, and the MDF housing with stiffened, foam damping reduces vibration. There is no question that the manufacturers of Focal did not allow premium quality raw materials and components in the production of the monitor this time either.

There are two two-colour LEDs on the front panel, one in green when the monitor is active, red when in standby mode, and the other LED in green when Focus mode is on, and red when thermal protection is active.

On the back of the monitor you will find a balanced XLR input with + 4 or -10 decibel input sensitivity to choose from. There is also a balanced 1/4 jack connection on the rear panel, a main switch and a switch for standby mode, which puts the speaker in sleep mode when active, if it does not detect a signal, and switches it back on as soon as it detects a signal again. There is also room EQ control on the back and a footswitch (or pedal) for the unique Focus function.

The 360-degree, rotating baffle features an inverted dome beryllium, inverted dome tweeter covered by a metal guard. (The word “On” in the name of the speaker refers to the chemical symbol for beryllium) The tweeter is class A / B and has a power of 100 watts. This rotating baffle also allows the monitor to be placed vertically or horizontally, with a subwoofer and bass port underneath.

The speaker also has a Class G 300 Watt subwoofer and a 150 Watt Class G subwoofer.

The subwoofers have the conical design of the Focal W composite sandwich membrane, which is a double fiberglass design where the cone is made up of two thin layers of woven fiberglass and a layer of foam is also part of this design. A compact, high-performance neodymium magnet drives the W composite cone. Thanks to this design, an equally rigid, homogeneous yet flexible structure has been created. The monitor was also equipped with a TMD or Tuned Mass Damper tuned mass damper. This suspension mode facilitates the smooth transmission and even distribution of frequencies.

This studio monitor is a three-way reference monitor, the maximum sound pressure is SPL – 118 decibels, the frequency response is between 37 Hz and 40 kHz, but when used in two-way mode, the maximum sound pressure is 105 decibels and the frequency response is 90Hz and It is between 20 kHz. The monitor has also been given a new function, this is called the Focus / Focus function. To do this, a foot-operated pedal and a ¼ cable are also mounted on the monitor, allowing it to control a separate crossover when connected to the speakers, which changes the frequency response. In practice, it transforms a three-way speaker into a two-way speaker, which is an extremely useful function for controlling musical mixes and adjusting and fine-tuning the bass.

The reflex port is located next to a 10-inch subwoofer, a rectangular port that is fairly large in order to maintain tone balance even at high sound pressure and reduce compression losses that could potentially compromise dynamics.

The central drive is separated from the front of the rotatable module by a rubber retaining ring, so-called silent blocks have been developed against vibrations that may occur at the mounting bolts, which separate the bolts from the chassis to minimize resonances.

The center drives are made with Neutral Inductance Concept, or NIC technology, which reduces the vortices generated by the frequency-dependent current flowing through the voice coil.

The inverted, dome beryllium tweeter produces a perfect linear frequency response and detailed treble, which is best achieved through optimal energy input between the dome and the pendulum coil.

The TMD suspension and Faraday ring are responsible for reducing distortion below 1 kHz and ensuring high linearity even in the 1 -3 kHz range, as well as improving the high frequency response and reducing resonance. TMD is a technology that is set to reduce or stabilize the level of vibration within a structure. (this technology is also used in cars and skyscrapers)

The subwoofer, together with the concentric Faraday ring, optimizes the magnetic field. The manufacturer said it reduced subwoofer distortion by seventy percent. Both Class G amplifiers use BASH amplifier technology, which is not based on multiple power lines, but on a constantly changing supply voltage driven by a high-speed Class D power supply. Instead of maintaining a constant voltage in the power cord, the Trio 11’s intelligent PSU tracks the needs of the power amplifier, reducing the power cord to zero volts when there is no input signal, and decreasing or increasing the level if the input signal also decreases or increases. .

Thanks to the G and D class combination, there is less heat loss and no need for a large heatsink, only the metal rear panel of the speaker functions as a radiator. After a long period of operation, the rear panel was not hot even at higher SPLs. 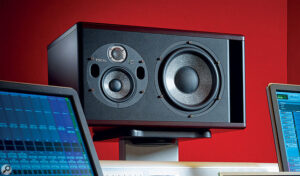 The Trio11 Be Red studio monitor was tested in a relatively large studio of approximately 32 square meters. The acoustics of the studio were adequate, with acoustic panels placed on the walls and ceiling providing adequate sound absorption and diffusion. In the case of sound recording or sound mixing studios, it is even more important that the room has perfect acoustics, as the quality of the sound recording is significantly degraded if the studio resonates. Subsequent digital settings are nowhere near as perfect as a sound recording recorded in a flawless-sounding studio.

The manufacturer recommends that you operate the speaker for approximately 20 hours during initial setup and setup, testing at medium volume and preferably as low a frequency as possible.

We first started musical testing with jazz music. We listened to Nora Jones ’song Nearness of You. The Focal Trio11 controlled the sound it reproduced with great concentration and beauty. We experienced accurate, dynamic, extremely detailed sound. Clarity, dynamism and fine detail remained at all volumes. This was followed by his current hit, 24k Gold-Mood. The studio monitor produced an extended sound image, the vocals and instrumental details were recognizable, clear and understandable. The mid-range sounded right, the bass was extremely intense and powerful. 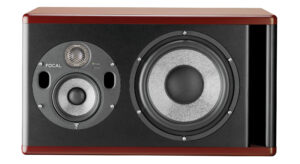 With its extremely impressive performance, aesthetic and elegant appearance, the Focal Trio11 is clearly the market leader among studio monitors with similar features and categories. We recommend it in medium or larger studios, as its size requires quite a lot of space, and due to its high weight, stable racks are required.

The price is quite high in the studio monitor category, but instead of a monitor we get practically two, as it can be used as a three-way and two-way studio monitor, thanks to the new Focus function. We couldn’t connect to the sound, which may also be due to the fact that the studio where the test took place had really perfect acoustics, and so this amazing speaker could really deliver maximum performance. If you are looking for a studio monitor for professional purposes, we definitely recommend the Trio11.