We had tried the predecessor of the JBL Flip 5, the JBL Flip 4, before and it made a really positive impression on us, so we were very curious to see how the newer model, the Flip 5 and the Flip 4 Charge, differed from it.

The exterior of the JBL Flip 5 hasn’t changed much from its predecessor. The usual cylinder shape, size and design are also very similar to the Flip 4. Waterproof up to a depth of 1 meter, IPX7 certified and rubberized to protect against damage. Its performance is quite serious compared to its size, 20 Watt RMS. It has 1 4.4 x 8 cm speaker and 2 side passive bass radiators. 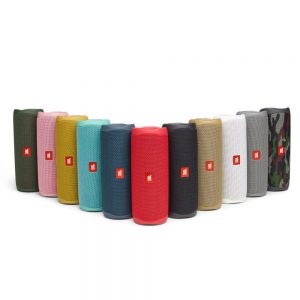 The manufacturer offers 11 colour versions. Unlike the Flip 4, the charger has a free USB-C connector. The 3.5mm Jack socket lags behind it. Instead of the Connect connection (with which we could connect up to 100 Flip speakers), it was given a Party Boost function, with which two Flip 5 speakers can be connected. (Unfortunately, the Connect connection on previous Flip models isn’t supported by this new feature.) Honestly, we don’t see much point in connecting multiple speakers, it’s easier to use a higher-powered speaker like the JBL Boombox or UE Hyperboom instead. 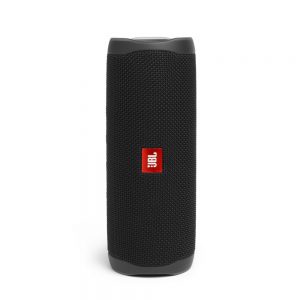 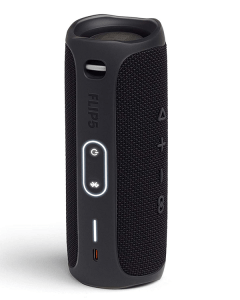 It can be expected to last about 12 hours and has a range of about 10 meters. However, phone calls cannot be made hands-free. Speaker frequency transmission: 65 Hz-20kHz, weighs 540 grams. On the back are the power supply, Bluetooth pairing button and USB-C input. Around the buttons, when lit, lights up. Of course, there are also on / off and volume control buttons on the speaker. The wrist-like shoelace holder has not changed compared to the Flip 4. Equipped with a 4800 mAh lithium-ion battery.

It really doesn’t matter where we listen to the speaker. We first tried JBL in an acoustically ideal room, then in a small study with pretty unfavorable acoustics, and finally we went outside and listened to it in the garden. We found that the small, portable speaker sounded very nicely, clearly, although the mid- and high-range sounds proved to be a little weaker. In the study with unfavorable acoustics, we experienced some reflection problems that caused the sound to lose some of its purity. Listening in the garden, we were quite satisfied with the sound even at high volume, the medium and high sounds were weaker than expected in this case as well, but the bass seemed to be especially better and more intense in the open space, which is important for a portable speaker.

JBL portable speakers are also ideal for computers or laptops, or even make great music for parties and garden parties. If used indoors, be sure to provide acoustic treatment for the walls and ceiling of the room. In the echo rooms, even the most expensive audio and hi-fi devices do not sound properly. Outdoors, we obviously can’t attenuate outside noise, so the sound from portable speakers doesn’t come close to the quality of the sound emitted by more powerful speakers.

The design of the JBL Charge 4 is almost identical to the look of the Flip 5. 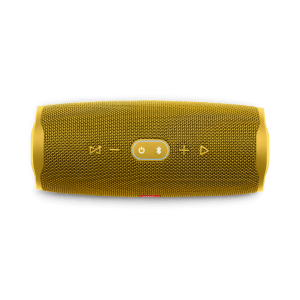 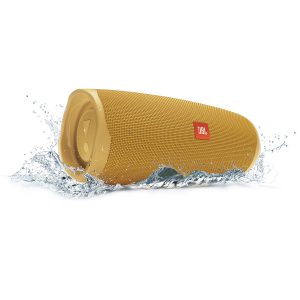 The Charge 4 is also waterproof, but has a JBL Connect feature, similar to the JBL Flip 4. What makes it different from other models, however, is that thanks to its 7500 mAh battery, up to 20 hours of playback is possible. Approximately 3.5 hours of charging is required if discharged. It could have been more vivid in its sound, but it performed very well in terms of bass.

Of the Blutetooth speakers, JBL products stand out due to their excellent sound. Although the Flip 5 is a newer model, we would vote for the Flip 4 or the Charge 4. One of the disadvantages of the Flip 5 is that it cannot be used to make a phone call, and that, unlike previous models, it did not have JBL Connect, but Party Boost, so we can only connect with a JBL speaker that also has this connection. One of the great benefits of the Charge 4 is that it can last almost an entire day on a single charge thanks to its huge battery. In terms of sound, we can’t really relate to the performance of the speakers, in fact, it’s absolutely remarkable that such a small device is capable of such serious performance. However, it matters a lot. what acoustic room we listen to them in. Both the Flip 5 and Charge 4 are waterproof, so you don’t have to worry about using it outdoors and it’s raining, spilling on a drink, or falling into the pool.