The Japanese brand is not unknown among hi-fi and audio owners. JVC engineers used state-of-the-art technology when producing the DLA NX7.

What are the criteria for choosing a projector?

One of the most important aspects of selecting projectors is image quality. Also for televisions and projectors, the ratio of contrast to black level is one of the most important factors to consider when buying them. The quality and type of lens and optics also affect the colours and tones of projected images. The higher the brightness of a projector, the more intense, deeper black tones it can produce in higher light, so that subtle tones are retained. 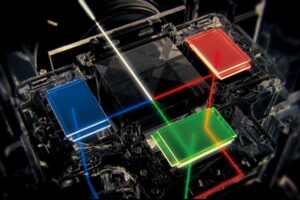 Well-designed projectors produce low native black levels, which can then be processed later with dynamic iris or other methods, resulting in saturated, deep black levels even in the darkest scenes. Lcos imaging devices were used in the JVC NX series. 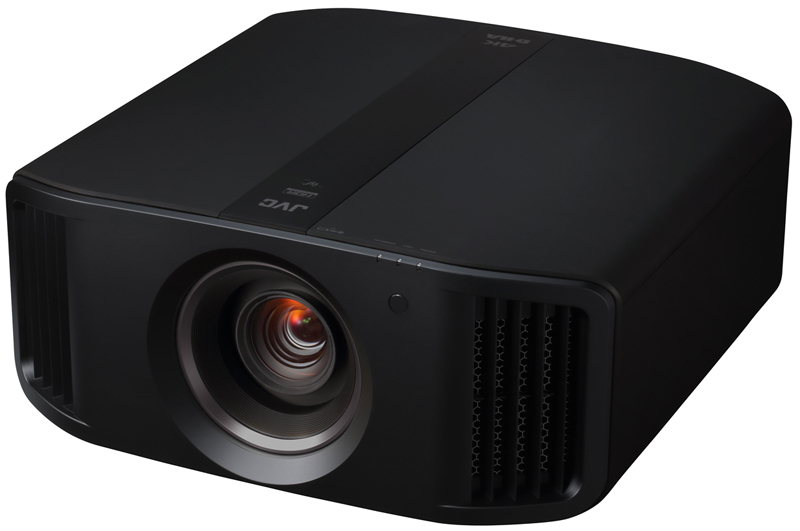 Thanks to the 0.69-inch, native 4K D-Ila imaging chips, a truly stunning black level and perfect contrast was achieved with the NX7 projector. This great device can also display 8.8 million Pixels! Extensive colour palette, balanced white level ratio and brightness characterize the projector. The Wire Grid polarizer further deepens the black level, and the Auto Tone-Mapping feature allows you to display HD content in even better quality thanks to the more advanced Frame Adapt HDR mode. The NX7 model has 1900 lumens of brightness and a nominal native contrast of 80,000: 1.

A firmware update has also been released for 4K D-Ila home theater projectors and is available for free download. The Frame Adapter is a dynamic tint mapping feature that automatically adjusts HDR10 content for optimal brightness, colour composition, and hue. The brand uses its own algorithm to analyze the different color content and brightness, as well as the peak brightness of HDR10 content, and then adjusts the dynamic range of the most perfectly projected image based on them, not only for darker scenes but also for brighter scenes. It also analyzes the color saturation, hue, and brightness of video files and adjusts them to the appropriate level, meaning that this update automatically adjusts all necessary settings when projecting HD images. Frame Adapt HDR audio mapping performs dynamic adjustments.

The HD update is further tuned with the Smart Optimizer smart feature, which calculates projection conditions and projector status during setup. With this new function, it is also possible to specify the size of the projected image and the light gain of the projection screen in the menu. It also takes into account the factors that determine the projector’s luminous flux, the condition and setting of the lamp, the position of the zoom lens…, and so on. Previously, the image mode could be set in 3 steps, with the NX7 projector in five steps. In practice, this means that HD content will appear on the screen even more perfectly, nicely and clearly.

The NX7 offers much finer settings for HD content than its predecessors. The three default settings are Picture Color, Dark Level, and Light Level. These allow you to adjust the overall brightness of the image, or adjust only the dark or only bright parts if you wish, but there are already five adjustment options available through updates. 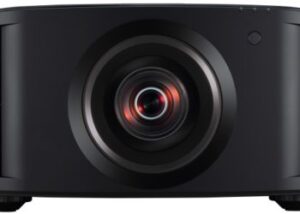 The large glass lens provides sharp images, wide focus, even light transmission, and even brightness. The JVC projector also has excellent zooming and switching capabilities. A true glass lens results in less distortion and a sharper image, a common rainbow effect on DLP projectors, and a pixel grid on LCD projectors not seen with this unit. The 65mm diameter motorized lens and focus also guarantee perfect image quality. The projector is very quiet compared to its predecessors.

Features include Clear Motion Drive frame interpolation and Multiple Pixel Control (MPC) for improved detail. Low latency mode also features this excellent projector, which offers 11 adjustable image modes, is equipped with a 265 Watt NSH lamp with a lifespan of about 3,500 hours, and in Eco mode it can increase to up to 4,500 hours. Compared to previous models, the brightness has also been increased. 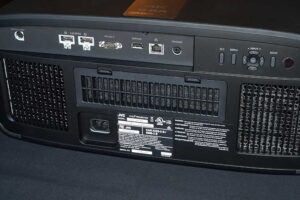 The remote control has become much smaller and more modern in design than, for example, the NX5 projector. However, this innovation cannot be written in favor of the new model, as this small remote control is not very transparent, and although it has a backlight, it can be easily pushed to the side when you want to switch due to the uniform placement of the buttons.

The testing was performed in a sophisticated cinema room of approximately 25 square meters. The complete blackout was solved by the owner with thick acoustic blackout curtains, so practically the cinema experience is really like sitting in a cinema hall of a plaza. Installing the projector was very easy and quick, no hassle at all. Our first test subject was the 2006 fantasy adventure film Eragon. We were pleased with the performance of the projector, experiencing extremely lifelike colours, optimal hues and satisfactory black levels in both dark and daylight. The same can be said for the 2010 fantasy film Clash of the Titans. The projector projected perfectly clear and perfect images on the move, and we tested the brightness even under a lamp, and it didn’t disappoint.

JVC’s K projectors are rightly among the best projectors. Benefits of the NX7 include; extremely quiet operation, a true glass lens that allows you to project much more vivid and clearer images than LCD and DLP type projectors. And thanks to firmware updates, there are even more opportunities to further optimize image quality. It really transmits HD images flawlessly. The brightness has been increased so that this device works perfectly even in daylight or lamp light. Both the zoom and the lens are perfect, and the light transmission and brightness are balanced with an extremely wide color palette. And the impressive Auto Frame Adapt and Auto Tone Mapping features add a lot to make HD content appear on the screen in truly perfect and lifelike quality. The extensive image adjustment menu is also very useful.

However, we were no longer so satisfied with the remote control. Previous models had a larger, logically arranged remote control, while the NX7’s remote control was not well laid out. We missed wireless HDMI, and it would be nice if we didn’t just produce this great projector in black. The contrast could be even more perfect, and although the black level has improved a lot compared to previous JVC projectors, it could still be slightly refined.