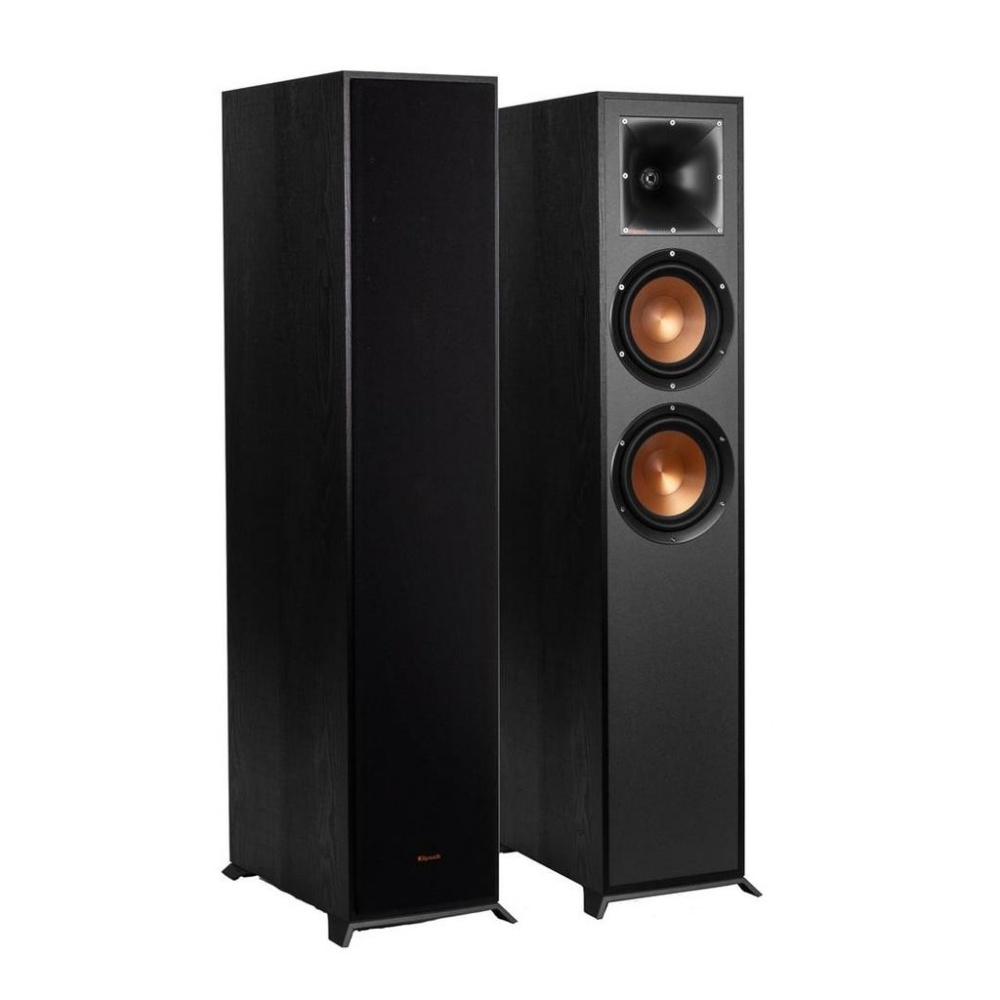 The American company was founded in 1946 by Paul W. Klipsch in Usa, Arkansas. The exterior design of the Klipsch R-620F floorstanding speaker has been updated and appealed compared to previous models. It is also excellent for home theater systems and stereo equipment.

The two-and-a-half-bass reflex speaker has a sleek, slightly industrial look, which suits it very well. The black, foiled MDF speaker box has been given a slight dark grey colour, and a magnetic cover silk can be placed on the front panel as required. The cheap, plastic bases are not adjustable, but they look good, tilting the speaker back slightly, so it adjusts the scattering angle exactly to the listening position.

There is also a dark grey foil on the back. The square Tractrix reflex funnel handles the air flow, under which there is a cable connection, only single cabling is possible. The red and black plastic clamps do their job well. 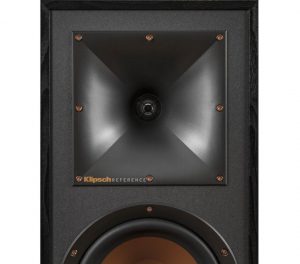 The Tractix funnel LTS (Linear Travel Suspension) tweeter has a linear suspension, the magnet behind it is thin and small, and the rigid IMG (Injection Molded Graphite) copper-coated diaphragm deep center radiating pair has already received a larger magnet. The inside of the speaker has fairly solid braces that increase the strength. It weighs 18.6 kg.

Klipsch’s Reference (R) series speaker has a sensitivity of 96 dB, an impedance of 8 Ohm, a frequency transmission of 38 Hz-21kHz, a crossover frequency of 2000 Hz. It is recommended to place it at least 40-50 centimeters from the wall to get the expected full body bass .

During the test, we paired the Klipsch speaker pair with a Marantz SR6014 amplifier. The site was a roughly 25-square-foot living room where acoustic conditions were inadequate. Acoustic measurements were performed and based on the results obtained, we recommended the owners to place sound-absorbing panels and diffuser elements on the walls and ceiling to achieve the ideal sound. The rather large window surfaces (huge windows, and glazed patio doors) reflect the sounds and create unpleasant echoes, so soundproof curtains will also be needed. No matter how much we spend on audio and hi-fi equipment, if we neglect to improve acoustics, don’t expect perfect sound. While some room amplifiers can achieve some improvement, these equalizer programs are only worthwhile with optimal acoustics.

We also listened to the performance of Klipsch speakers in several musical styles. First we chose an electronic style, we launched the joint song Martin Garrix – Blasterjaxx & Hardwell, Big Room Nevers Dies. We had a detail-rich sound, the highs sometimes seeming a little too vivid. We experienced good dynamics, a comprehensive, clear and airy sound image.

A tougher genre followed. We listened to Metallica: Unforgiven. The harder style proved to be a pretty big bite for the R-620, at least when it comes to treble, because it made it even more noticeable that the treble sounded intrusive, confusing. But it may have only appeared to listeners of our own kind with quick- eared.

Almost at the same time as testing the R-620F, an acquaintance of ours asked for a couple of tests on the Klipsch R-820F speaker at home. This allows us to compare the two models of the brand. We didn’t find too much of a difference in design and performance, although we could try out the R-820-F speakers in an optimal-sounding room with decorative printed sound-absorbing panels on the walls, which, as owners are lovers of travel, from major cities around the world. images are taken.

Diffuser front panel elements were placed on the walls behind the speakers, and bass traps were placed in the two corners. Thus, we can report a slightly better sound, although the harder rock music was characterized by overly sharp treble in this case as well. Both sharpness and stereo image fell short of our expectations, and detail and resolution could be better. Plastic soles on both models effectively dampen vibrations. On the other hand, the R-820F weighs much more than the R-620F, 24.5 kg, which makes it difficult to move. It has a sensitivity of 97 decibels, a rated power of 15 watts, which is 50 watts more than that of the R-620F, and a maximum music power output of 600 watts, which is 200 watts more than its smaller sibling. Since we didn’t see a significant improvement in quality or performance in either design or sound (although the design hits our fancy), we would rather vote for the R-620F because of its heavy weight.

The sound of the Klipsch speaker can be said to provide a detailed, clean and airy experience, the stereo stage is accurate but its width is limited. Due to its compact size, we also recommend it for smaller rooms. A good amp is definitely needed to make the sound warmer and softer. Disadvantages are that it is only available in one colour, does not cope with all musical styles, and the interior design is not thorough enough. Probably the unfavorable acoustic conditions also contributed to the fact that we heard the faults of the speakers so firmly, so the importance of acoustic treatment cannot be stressed enough! Echo and standing waves significantly degrade the performance of the speakers. We are satisfied with the exterior of the speaker, its compact size can be considered a positive, as well as its price.