We went to Fót in Pest county two weeks ago, where we tested the active speakers of the KRK Rokit V8 S4 in a family house. István, our client, has been playing music, bass guitar for many years, and they perform regularly with his band. A home sound recording and mixing studio was set up in one of the rooms in the house, measuring approximately 4 × 6 meters. With the importance of acoustics in mind, the amateur musician also covered the walls and ceiling with acoustic panels, creating an ideal sound in the studio. Acoustic measurements were performed, and in accordance with the results, we proposed the installation of sound-absorbing curtains, which provide a solution to eliminate interference along the window surfaces, and which further improve the acoustics of the room.

The “V” series from the American company consists of studio monitors specifically designed for professional purposes. These speakers were developed primarily for sound recording and sound mixing. The V8 S4 is the largest piece in the series, weighing 14.4 kg. The appearance of the monitor does not come as much of a surprise compared to its predecessors. The black, plastic-covered housing is made of MDF boards, which guarantees a significant attenuation of resonances. The EVA anti-slip pad also serves to minimize resonance. The bright yellow colour characteristic of the brand did not change with this model either. There are no control buttons on the front panel, only the illuminated KRK logo, which is also a performance indicator. On the back there is an on / off button, the input socket (Neutrik combined TRS / XLR connector), the input sensitivity control, the illuminated logo / power indicator on the front can also be adjusted with a switch, which is also located on the back, as well as the USB port and Also 2 EQ controllers. 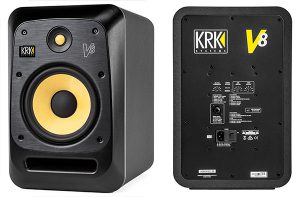 The two-way studio speaker has a silk, Kevlar composite tweeter of 30 watts, and the Woven Kevlar-composite cast aluminum framed subwoofer has a power of 200 watts. The amplifier is class “D”, which means very good efficiency, capable of serious performance without requiring too much cooling. The speaker frequency transmission is 29-24000 Hz (+/- 3 Db), the sound pressure is 118 dB.

The KRK Rokit V8 S4 studio monitor, like most speakers, is equipped with an EQ function. With the help of Equalizer room correction, we can improve the unfavorable acoustic conditions of the given room. During the design of the KRK V8, engineers tested several 100 acoustic settings. The V8 offers a total of 49 different EQ sound modes, which is truly exceptional. Nevertheless, we have to say that the EQ function is not omnipotent. It is not able to solve all the acoustic problems due to the specifics of the rooms! We emphasize that the acoustics of the rooms must be treated with sound-absorbing and diffuse panels, because EQ correction alone does not remedy the problems caused by severe surround sound! However, as a supplement, room correction can be really helpful. 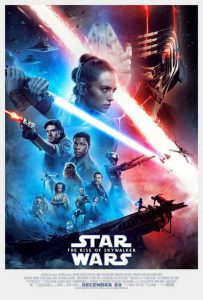 We listened to the soundtrack of Star Wars, performed by the Berlin Philharmonic. The V8 produced a clear, understandable sound, the bass sounded intense, the mid-range was subtly present, just as it should be. The treble was also appropriate. The different instruments were clearly well separated from each other, recognizable. The EQ correction was easy to set, it can be played well. We listened to David Guetta’s hit Let It Be Me after that. The performance of the speakers was okay with this song as well. We could hear a detailed sound. The sophisticated hearing of audio experts may sometimes prove to be a little low in bass power, so fans of deep ranges are also advised to purchase a separate subwoofer.

The listening test continued with a legendary musician. The rhythms of Mike Oldfield’s Shadow on the Wall song sounded smooth, harmonious, balanced. We also tested how the sound of V8 speakers changes when placed at different distances. As a near-field speaker, the sounds seemed a bit intrusive, so it’s better to place them in the middle. (tailored to the listening position, of course.) In 2016, the action film Jason Bourne, starring Matt Damon, was shown in cinemas. The excitement of the scenes was heightened by the excellent sound. We experienced powerful deep, clear dialogues and a sense of space.

Conclusion – how many points do we rate the Rokit V8?

The KRK Rokit V8 S4 active studio monitor is available at an affordable price. All ranges sound nice, clear, and the EQ has plenty of adjustment options to fine tune it. There was no sign of ear fatigue. Disadvantages are that we find the 14.4 kg weight a bit heavy, the screws and switches are of poor quality, and when used as a near-speaker, we felt overly “pushy” for some sounds. The bass sounds sounded definite, but at times perhaps a little weak. Anyway, we were happy with the speakers, we also recommend it to studios or home theaters. 4 out of 5 points are awarded to V8.