We have tested the LG HU810PW laser projector!

We have tested the LG HU810PW laser projector! 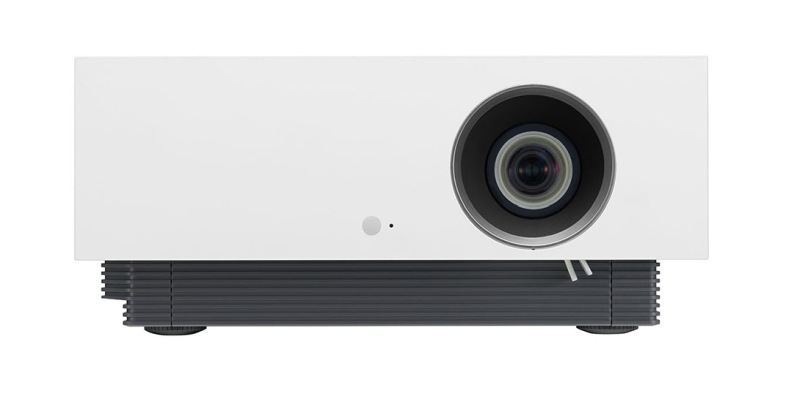 The LG HU810PW projector also has two lasers. In this case, the two lasers use a green phosphor, the LG projector produces extremely lifelike colours and a brilliantly sharp image thanks to the 4K DLP chip. Unfortunately, this DLP chip also creates a medium contrast ratio, which is why the HU810PW lags behind the best home theater projectors we’ve examined before.

Let’s take a closer look at the projector.

UltraHD 4K resolution is a huge advantage for the projector, and every detail of the video is stunning. This projector has a serious brightness, producing roughly 1,500 lumens of light. Vivid, beautiful colours characterize the production of the device. The disadvantage of the 810 PW is that it produces fairly medium quality, grayish black levels in dark scenes. Much more expensive than better contrast 4K projectors such as the Optoma UHD30. Because of this, we can’t recommend the LG HU810PW to everyone in this price range, but if you want high brightness, vibrant colours and detail, it’s hard to find a competitor to this projector. The projector is HDR, 4K compatible, but unfortunately not 3D compatible. It offers manual zoom and also manual lens shift functions, with a lifespan of 20,000 hours specified by the manufacturer. 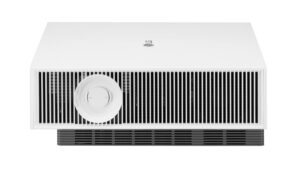 The HU810PW does a better job with HDR and 4K than most “HDR” projectors we’ve recently tested. Nevertheless, it is important to keep in mind that no projector can produce a true HDR image. As befits a higher-end projector, the 810PW has both horizontal and vertical lens switching. The zoom is also adequate at 1.6x. The housing is about twice the size of some other projectors and is significantly heavier. 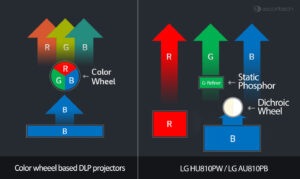 The LG HU810PW has two lasers, one blue and one red laser. In addition to producing all the blue light, the blue laser transmits some of its light to the green phosphor. So lasers not only create light but also colour. DLP-based projectors usually separate these two functions, the lamp generates white light, and then colour filters get some of the light to the screen when needed. Colour wheels are not as effective in the first place, which is one of the reasons why lasers work great in projectors.

Another advantage is that lasers have a much longer lifespan than UHP lamps. The life of the 810PW is estimated by the manufacturer to be up to 20,000 hours, or about 14 years if operated for 4 hours at night. It turns on and off much faster than most similar projectors, which is another good point for this projector. If you were to think that lasers need less cooling and thus fewer fans than traditional incandescent projectors, you would be wrong. In general, the 810PW is quieter than small, inexpensive DLP projectors, but you can still hear the sound of the fan. 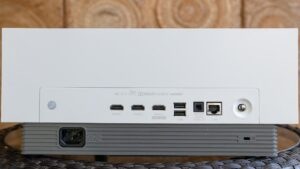 Two of LG’s three HDMI inputs also have HDMI 2.1 with ALLM (Auto Low Latency Mode) and eARC. The 810PW also offers some built-in streaming applications, but for some reason it lacks Netflix and HBO. 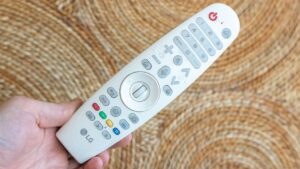 The 810PW has one of the most unusual remotes we’ve tried on projectors. It is similar to the remote control of LG TVs in that a motion-sensitive cursor appears on the screen even at the slightest touch.

It offers endless settings, many of which are confusing. For example, Adaptive Contrast and Dynamic Contrast are located in two different submenus, separate from the standard contrast settings.

One very strange problem that cannot be solved by any setting is the roughest synchronous delay. You can set the audio timing in the menu, but this only applies to the projector’s own internal speakers. If you are using an external speaker system, it must have the audio sync setting option. 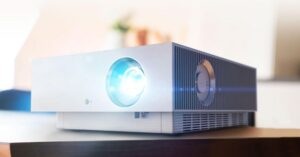 LG’s contrast ratio is poor. Very bad. The much cheaper Optoma UHD30 has greater depth and is cleaner, sharper. Contrast ratio is the most important factor in overall image quality.

But brightness is similarly important for projectors. The two lasers as well as the phosphor allow LG to create stunningly rich and vibrant colours.

The biggest strength of DLP technology is its ability to create an extremely sharp image without blurring motion. So every wrinkle, every hair, every blade of grass, appears in much greater detail, with greater resolutions. The Optoma UHD30 is pretty much adequate in this regard, but LG seems a bit sharper overall. So overall, the LG HU810PW looks much better than you might have expected, apart from its medium contrast ratio.

LG has a strange feature that we haven’t experienced with other laser-based projectors. Technically called speck, it seems as if some pixels are brighter than others.

We were constantly trying to improve the black level. The contrast ratio is poor. LG has done everything possible to cover up this flaw, but with Texas Instruments DLP technology, that’s all they can do.

With brighter scenes, the 810PW is capable of truly beautiful images. But when it comes to dark scenes, the strong light output blurs the whole image, which isn’t really an ideal solution to correct a faint black level.

Another thing we noticed was that when we want to get an accurate picture, the color temperature depends on the iris setting. It turns noticeably blue at lower brightness.

You can also make energy-saving settings, brightness optimizations, and dynamic contrast settings on the projector. At the Warm Color Temperature setting, which is closest to accuracy, the image was missing green for lighter images and there was too much red for darker images. Colours with HD content were generally accurate, with only blue and magenta being slightly reddish.

The brightness was fantastic, of course. With HDR content, it was even brighter, with a maximum brightness of 2600 lumens in the brightest picture mode. In this mode, however, the image was bluish / greenish.

Our opinion about the LG HU810PW laser projector

Thanks to the two lasers, this projector has stunning brightness and produces amazing colours. Unfortunately, the contrast ratio is extremely poor, the black level is very poor. The noise level is low, but you can still hear the fan. The price is too high compared to its performance compared to other projectors in a similar category.

When building home theater systems, we not only have to pay attention to what brand and quality of audio, video and hi-fi products we buy, but we also have to take care of the acoustics of the cinema room if we want clear sound. Acoustic sound-absorbing and diffuser panels, which can be placed on the walls, are the most suitable for improving acoustics. In the cinema room, you can have a real cinema experience by placing acoustic, sound-absorbing blackout curtains in front of the windows, so that even complete blackouts can be realized.