We have tested the Mackie CR8-XBT studio monitor!

The Mackie CR8-XBT speakers are designed for maximum flexibility and will appeal to as many users as possible. The Mackie CR8-XBT can be used as a multimedia monitor for desktop PC, gaming and music production, meaning that Mackie CR-X Series speakers can also function as a primary or secondary studio monitor.

A significant trade-off for the affordable price of the CR8-XBT is that one speaker is active and the other passive. A switch (on the back of the speaker) lets you choose which one is the active monitor. The second speaker is passive and must be connected to the supplied speaker wire (also useful for connecting speakers next to a computer). 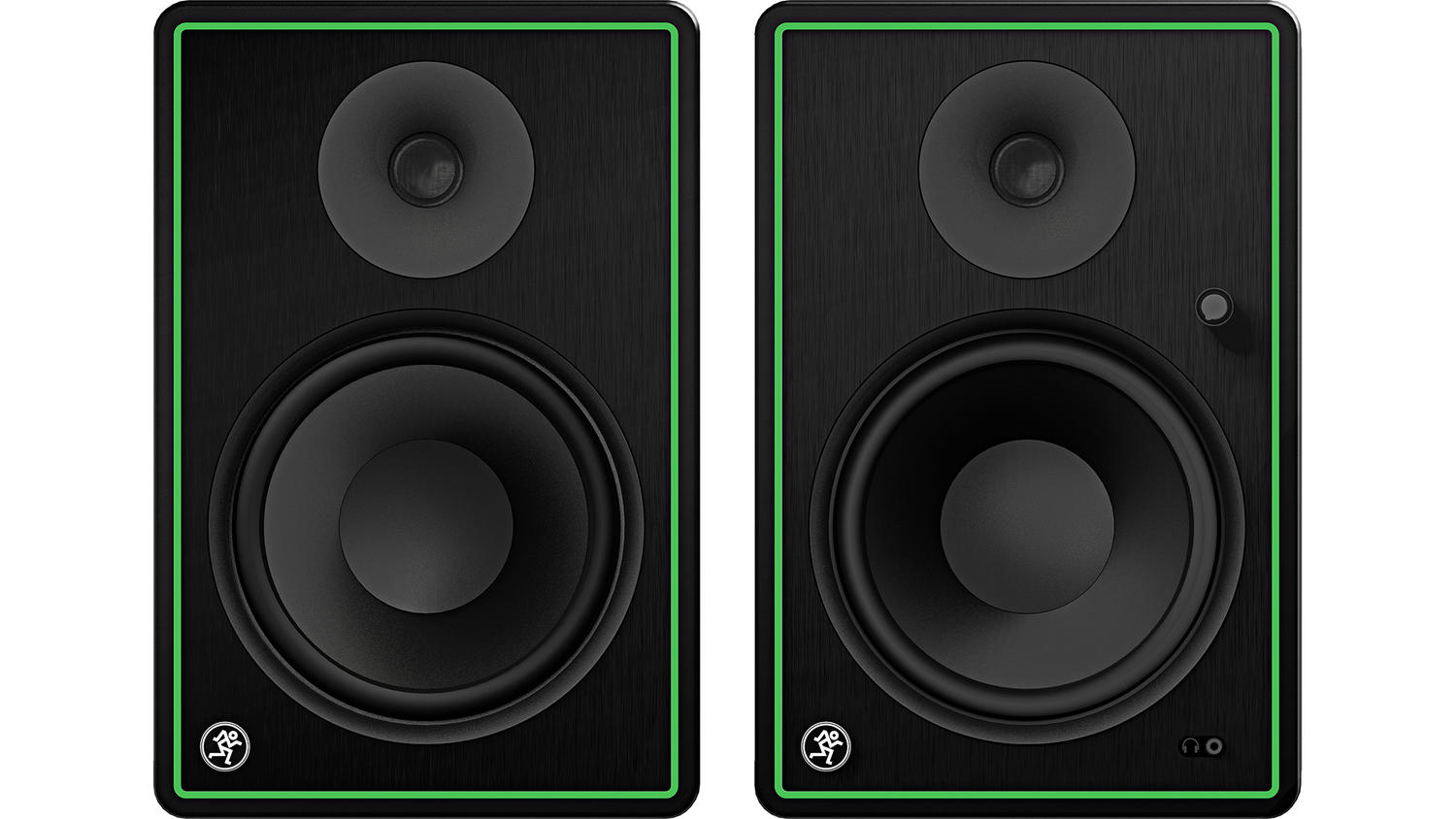 All monitors in the CR Series are of similar design and features and are offered at very competitive prices. All models are made with an MDF housing with black foil, and measure 37.6 x 34.6 x 25.1 cm. The two speakers together weigh 16 kg, although the active speaker is slightly heavier due to the electronics. The speakers are of good quality and solid construction. All the speakers in the Mackie CR-X series have a green ring around the edge and the Mackie logo is also present. There is a power switch on the back of the active speaker so that it can be left in ‘constant standby’ mode, and a rotary power switch/volume control on the front of the active monitor. There is also a built-in 1/8 headphone jack on the front of the active speaker which can be controlled by the volume control. The frequency response is between 40 Hz and 20 kHz. The maximum sound pressure level is 108 dB. 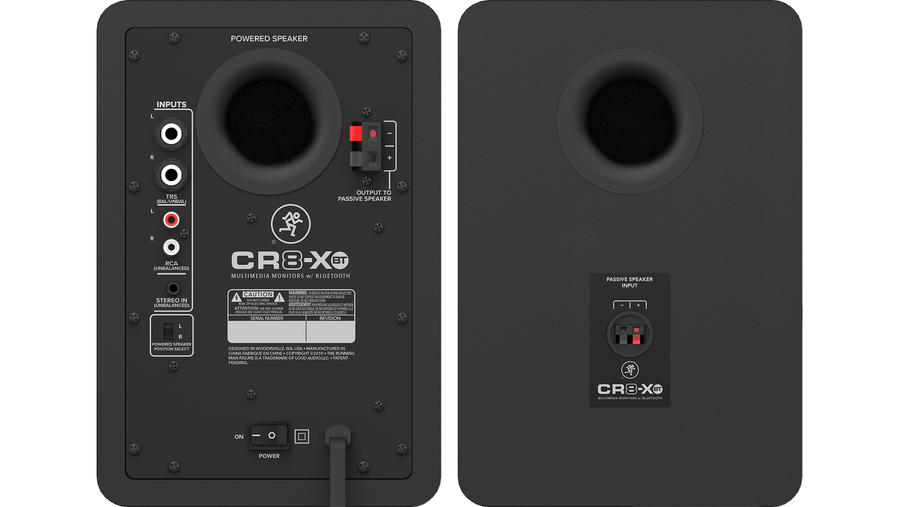 The Mackie CR8-XBT is well built, but it doesn’t compare to some of the more expensive monitors, but at this price you wouldn’t expect much more.

At first we were a little doubtful that you could get a good quality studio monitor for such a low price, but we were pleasantly surprised at how good the CR8-XBT sounded with every sound source we tried it with. Because the CR8-XBT speakers don’t have frequency response switches, we were expecting an exaggerated bass response. (The speakers also come with an accessory package that includes RCA cables and foam pads that separate the speakers from the surface they’re placed on and direct the sound slightly upwards.) The CR8-XBT are rear speakers, so this should be taken into account when positioning them, as it will affect the sound significantly.

We tested the monitors in a small studio. The acoustics of the studio were optimal, with sound absorbing panels and diffusers on the walls and ceiling to ensure the ideal sound. For studios, it is even more important to eliminate echoes, standing waves and problems caused by excessive bass, without falling into the trap of over-damping. Whether building a professional or home studio, the first and most important step should always be acoustic treatment! Fortunately, thanks to sound-absorbing leather membranes and Pyramid diffusers, flawless acoustics have been achieved. Previously, the walls had been covered with foam wall panels, but the results were far from satisfactory, so the studio owner decided to replace the previous panels with products made from Perfect Acoustic’s premium materials (wood, acoustic cotton, acoustic silk…etc). The change was immediate and obvious.

All the sound material we listened to with the Mackie CR8-XBT always sounded clear, never exaggerated and accurately reproduced. The sound coming out of the speakers was more akin to high-end stereo speakers than neutral studio monitors, but still remained neutral enough to be used for some professional applications. The overall frequency response of the Mackie CR8-XBT was absolutely ideal. We got tight bass, the midrange was clear and defined, and the peaks were firmly present but not too sharp. When watching a movie, the pair of speakers performed quite well, although the upper midrange and treble were a little overpowering. The midrange was occasionally unbalanced.

It was an extremely positive experience that there was almost no noise when the speakers were in operation. This can probably be attributed to the Class AB amplification, as modern digital amplifiers often produce more noise when operating.

Bluetooth connectivity is available on all models in the range, which is advantageous because it allows the speakers to be placed anywhere in the listening area without having to deal with speaker cables. This was much more liberating than we first thought. We can move the speakers anywhere in the room, monitor mono or stereo sources . We can place the speaker or speakers in the bathroom or in the hallway. This flexibility makes the Mackie CR8 -at -XBT particularly useful when you want to listen to material you’ve created in the studio in another room – giving you an even more accurate picture of the sound. We heard obvious differences in the frequency range, for example. Thanks to the wireless connection, the songs sounded less sharp in the highs, but the mids were fine. The lows lost a little power, but still remained firm. Sometimes it seemed as if the monitor couldn’t cope so well with the very neutral and fine resolution of the sound source.

With the Mackie CR8-XBT multimedia speakers, you get a studio or multimedia monitor with as many connectivity options as you’re likely to need, the only missing link being the XLR balanced input. The CR8-XBT also comes with a download card for free downloads of the ProTools First and Musician Collection plug-ins.

This speaker promises high quality, relatively neutral, balanced sound at an affordable price. Its compact size makes it a good choice for a small studio or for those who don’t need frenetic volume. That doesn’t mean it doesn’t have the volume you need. It’s loud enough for its size. Bluetooth connectivity allows you to place the monitors virtually anywhere. It has an attractive exterior design, but the finish is not premium quality.