We have tested the McIntosh MA 8900 stereo integrated amplifier!

We have tested the McIntosh MA 8900 stereo integrated amplifier!

The American company McIntosh was founded in 1949. The company has been producing high quality audio products ever since. This time we were able to try out the MA 8900.

The 34.1 kg amplifier features a 5-band equalizer, modern switching and control technology, and a classic McIntosh style. The 2-channel device has a power of 200 watts per channel, a speaker impedance of 2.4.8 Ohm, a frequency response of 20 Hz- 20kHz, and a frequency transmission of 10-100000 Hz. 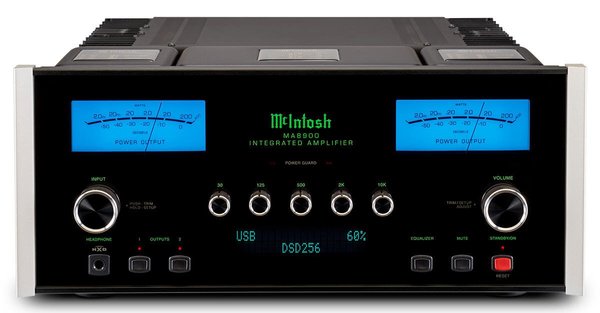 The brushed stainless and black painted steel housing is rugged and stable, which resonates reduces and guarantees a long service life. The unique black glass plate, the chrome cover gives the amplifier a really attractive look. There is a large blue power meter on the front panel, which can be turned off if it is found to be too strong. The rotatable buttons and illuminated logo were also located on the front panel. On the back you can see gold-plated speaker connectors, 6 digital, 1 balanced XLR, 6 asymmetric RCA sources, 2 coaxial, 2 optical, 1 USB, MCT dedicated inputs. The coaxial inputs support 24-bit 192 kHz signals, and the USB input supports PCM all signals up to 32-bit, 384 kHz. The device also has a headphone connection and RS232, IR, Data ports. The analog input can receive both magnetic and moving coil turntables. 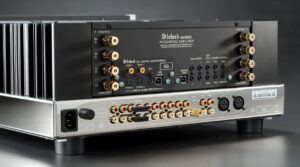 The inputs can be used independently in different configurations, any source can be connected. The input signal level and tone can be selected for each bypass input. The remote control is well designed, but the backlight was missing from it.

Huge power transformers and dual output autoforms are located in the middle of the amplifier. The McIntosh monogrammed heatsink is not only responsible for cooling, it has a very good heat dissipation material, to which a newly developed power stage semiconductor is connected, the amplifier does not need a warm-up time. It transmits the audio signal by electromagnetic switching. Thanks to the DA1 Digital Audio Module, the device can also handle more modern, up-to-date formats. The DA1 module uses an 8-channel, 32-bit digital-to-analog converter (DAC) Quad Balanced topology for the conversion.

The electromagnetic circuit results in a low contact resistance, so stable operation and minimal distortion can be expected. Unlike other brands, McIntosh technology prevents smoke, animal hair, dust…, etc., or corrosion from damaging the amplifier. The design engineers of the MA8900 have ensured that the amplifier can safely handle loads that could damage other types of amplifiers.

An old house, approx. We tested the McIntosh amplifier in the company of Dali Oberon’s standing speaker pair and Dynaudio subwoofer in his 21-square-foot living room. Sound-absorbing panels were placed on the walls of the living room, but based on our acoustic measurements, we determined that fewer sound-absorbing panels and more diffuser panels would be needed to create the ideal acoustics.

We watched the movie Public Enemies, a notorious American criminal, as a start. The film was made in 2009, starring Johnny Depp. The sound of the exciting cinema was vibrant, clear. We had a wide stage picture and a spatial experience. We heard balanced mid and high ranges, while the deep could have been more intense. The subwoofer managed to compensate for this to some extent, but unfortunately the bass range was still flawless either.

We listened to the work of the fantastic composer Hector Berlioz, The Overture to the Roman Carnival, so that we could also report on the musicality of the amplifier. We were happy with the dynamics and clarity, but we found the bass a little weaker than we needed to be. The finer details are sometimes lost. The MA8900 is characterized by neutrality, which is no problem, but we heard it sound too flat in places. Improper acoustics may also have played a role in our failure to find McIntosh perfect in everything. The spatiality, however, was fine.

The McIntosh amplifier can be used for many years thanks to modern developments, the use of solid materials and quality components, and the modular design. The brand also pays great attention to excellent sound. It produced spatial, realistic sounds, clear and distortion-free performance. However, there were mistakes that we have to mention. Sometimes the sound proved too neutral, the bass ranges were not intense enough, and fine detail was missing. The remote has no backlight, the amplifier is too big and heavy, and it would be nice to be able to control the subwoofer crossover, and the MACA capability wouldn’t hurt the DAC. The price is quite high. We would add 4.5 points out of a maximum of 5 points.