We have tested the NAD C368 amplifier!

We have tested the NAD C368 amplifier!

We’ve already tested quite a few amps and were really curious about the product from the NAD audio company. The NAD C368 is a hybrid stereo integrated amplifier that is an excellent combination of traditional NAD and modern technologies. 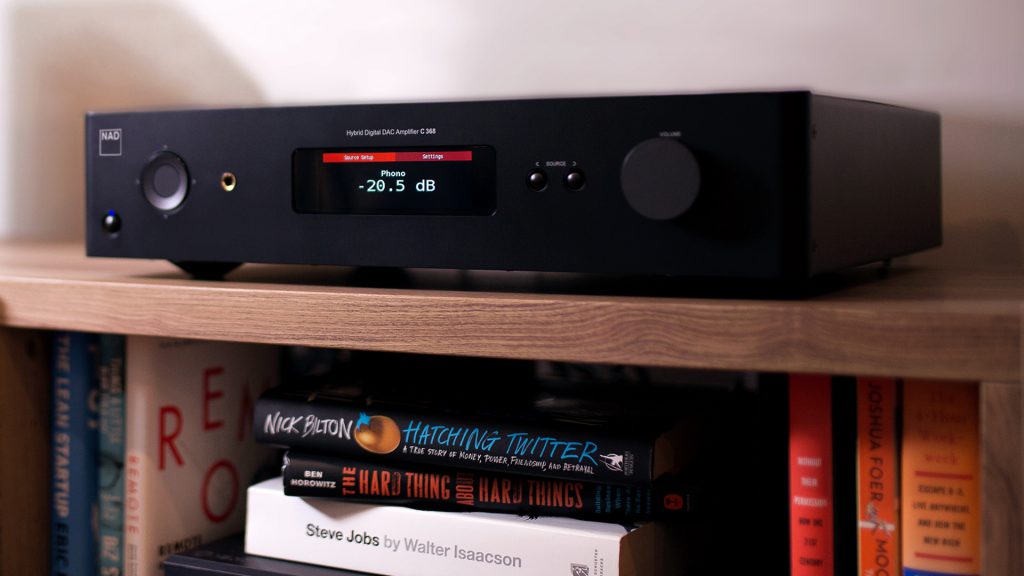 What do we know about the manufacturer?

New Acoustic Dimension (NAD) was founded by some audio fans, manufacturers, and sound engineers in 1972 because they were not overly satisfied with the audio products on the market at the time. Their main goal was to produce audio devices that did not focus primarily on their exterior design, for them excellent sound and high quality were always the most important considerations, along with durability and ease of use. It was thought that overcomplication, grooming and plenty of extra features would not benefit the sound. It is important that the quality of the input and output signals is the same and not distorted. An essential condition for this is the use of high-quality components during production. Distortion is most effectively minimized when the signal path is short, as it has a much lower chance of signal distortion.

Beauty cannot be at the expense of sound! 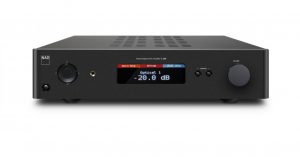 Seeing NAD’s hybrid, mid-range amp, we really don’t think of the “aesthetic” adjective. Extremely simple, clean, stable and solid, the housing has clearly been designed with practicality and durability in mind. To the right of the colour LCD display are 2 source selection buttons, to the left is the headphone jack. On the right side of the front panel you will find the volume control and on the left side you will find the control panel, with the help of which you can select the high and low balance, the speaker points…, etc. NAD C3682 The NAD amplifier also has analog, USB and 3 HDMI inputs, 2 coaxial and 2 optical inputs. 2 pairs of speakers and 1 subwoofer can be connected to the device. 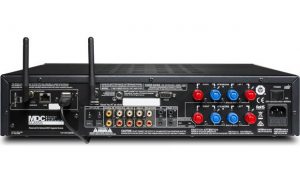 A Bluetooth connection is also available for this model. The MM Phono input also allows you to play old vinyl records. The frequency transmission is 10 Hz-65 kHz. The output power is 2x 80 Watts (impedance: 4 and 8 Ohms). The device received a PowerDrive circuit and an 8-channel DAC chip. The IR, ie infrared remote control, is not overcrowded with buttons, it is transparent and easy to use.

It is true that the latest amplifiers have many more functions, but in the case of the NAD C368 they did not want to charge the amplifier with unnecessary connectors and inputs. Instead, it was thought that anyone who wanted more functionality later could be further expanded with MDC cards thanks to the MDC module system. This way, you will no longer be surprised to discover 2 covers on the back of the device with the inscription MDC. MDC cards can be inserted by removing the covers. This way you can even stream your favorite music with an MDC BluOS card. 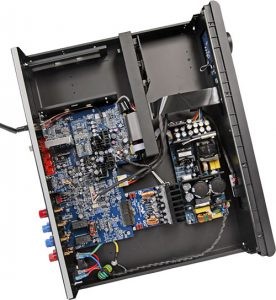 Class “D” amplifiers operate in pulse-width modulated signal switching mode. They can be as efficient as 90% while keeping losses low and heat production low. Because its output is completely off or on, the losses are not significant. In the past, it was mostly used only for subwoofers due to high distortion and limited bandwidth. Thanks to the improvements, Class “D” amplifiers are now able to cover the entire bandwidth, with the same distortion and signal-to-noise ratio as conventional amplifiers. As the heat production in this class is extremely low, either the heat sinks or the fans can be omitted, thus reducing the size and weight of the appliance. The NAD C368 weighs only 10.1 kg.

We tested the NAD amplifier at the home of one of our dear returning customers. The cinema room has optimal acoustics, only a few new printed sound absorbing panels have been ordered from us by the owner, printed with family photos. We were the first to watch the sc-fi film Divergent. Cinema with a special atmosphere takes place in the not-too-distant future, when a special social order is created by those in power. It was shown in cinemas in 2014. The performance of the NAD C368 absolutely met our expectations. Associated with Yamaha speakers, we experienced a differentiated, vibrant sound. The historical drama The Darkest Hour depicts the difficult political situation of British Prime Minister Winston Churchill, in the shadow of World War II. NAD confirmed the most important aspect of the manufacturers; the perfect sound. It provided a rich, impulsive and immersive experience this time as well. The speeches were understandable, and the sound effects and music were both beautiful and clear. We got a life-like effect. In 2012, he made his musical, romantic film, Pitch Perfect. The story focuses on members of the school acapella choir. The super music and vocals sounded flawless. The basses were deep enough, percussive, and the mid-range was present with adequate volume and strength. The high notes were sometimes found to be a little too restrained, cautious. We set out to conquer Paradise, in the company of Vangelis. We listened to the music of the film 1492, the Conquest of Paradise. We can really only praise the amplifier, the NAD engineering team really did their best to make the movies and music sound perfect. He reproduced the original performance.

For those who don’t care about the appearance of audio devices, the NAD C368’s minimalist amp may be the best choice. The sound is almost flawless, the price is affordable. It is characterized by high quality, durability and affordability. Maybe only the higher ranges are a little weaker than expected, but apart from that, we didn’t find a serious flaw. Because the amplifier doesn’t really grab attention externally, customers who care about the design aren’t likely to like the modest, understated exterior.