We have tested the Panasonic PT-FRZ60 laser projector!

We have tested the Panasonic PT-FRZ60 laser projector!

Panasonic was founded in Japan in 1918, although the name of the electronics company was different from the beginning. In 1955, the Panasonic brand was invented. They manufacture a wide range of products, this time we have examined a projector.

The PT-FRZ60 projector has many technological subtleties, more than 6,000 lumens of brightness, a wide zoom lens and requires no maintenance. 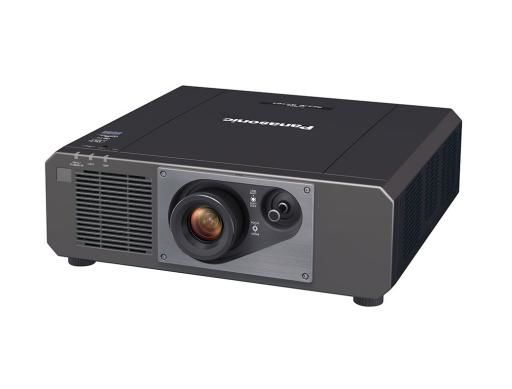 The PT-FRZ60 emits bright and sharp 1920×1200 images in 16:10 aspect ratio thanks to digital (DLP) imaging technology. The laser projector never requires lamp replacement. The light from the blue lasers passes through a phosphor wheel and a colour separation wheel, creating rays of yellow, blue, green, and red light that are reflected from the imaging chip, which transmits them to the output lens. Panasonic’s circuitry utilizes the projector’s laser technology, ensuring that if something goes wrong, the circuit will continue to operate and help maintain high brightness.

The PT-FRZ60 belongs to the upper category of economical projectors with a built-in lens. It is very advantageous to have no expensive lenses, however, the optics, brightness and imaging are also of a high standard. The disadvantage of a fixed lens is that it does not fit in every room.

The lens has a very wide double zoom, which provides great flexibility for installation. Thanks to this, the PT-FRZ60 is one of the easiest projectors to install, providing great leeway in terms of where to mount it.

There are three LEDs on the front that indicate that the projector is turned on or warns of the danger of overheating. Next to it is a light sensor to use the Daylight View function of the PT-FRZ60, which adjusts the color of the image according to the current conditions. The projector’s control panel is on the side farther from the air outlet. Power on / off and Menu control buttons are also on the projector, the PT-FRZ60’s power connector is stable, so the cable will not work loosely over the years. 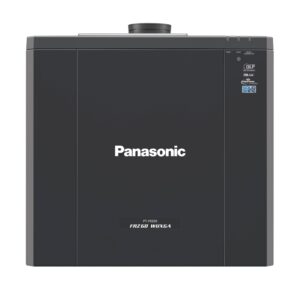 The projector can work with up to 4K video signals at up to 60 frames per second, which it receives via HDCP 2.3-compliant HDMI and DIGITAL LINK HDBaseT ports and displays in native resolution. There are a total of two HDMI inputs, two VGA and one composite video input on the projector. The PT-FRZ60 is one of the few projectors to offer HDMI-CEC control via its HDMI ports. There are also 3.5mm and RCA audio input connectors and 3.5mm audio output; the projector does not have built-in speakers. In addition to the RS-232 serial port, the projector has a Type A USB 5 volt / 2 amp connector.

However, the PT-FRZ60 projector does not have a Wi-Fi connection, or even an optional USB accessory, which is quite a shortcoming. But to offset this, Panasonic is offering the recently introduced PressIT wireless system. This allows PC and mobile device users to stream images and videos to any projector with an HDMI input and a USB port.

The PT-FRZ60 is literally one of the coolest projectors thanks to its ingenious heat dissipation tube design (dissipates heat from the imaging chip). The temperature of the PT-FRZ60 never rises too high, even after a few hours of operation. It is also a major advantage that the optics are sealed so the projector does not need a dust filter. Under normal conditions, only intermittent vacuuming of the suction openings is required.

The projector weighs quite a bit. There are four mounting points for ceiling mounting. It can be adjusted to any angle.

For those who want to place the projector on a shelf or table, the adjustable front leg will help. To prevent the projector from overheating, at least 50-55 cm of free space is required around it for cooling. In addition to the lens, there is a new manual control that can mechanically push the lens up (64 percent) and down (44 percent) and left (27 percent) and right (34 percent). Some will miss the motorized image shift, but it would mean a higher cost. In addition to lens shift, the projector can perform up to 40 degrees vertical and 20 degrees horizontal keystone correction.

The PT-FRZ60’s menu is logical and easy to use. The seven image modes are easy to select, as well as adjusting contrast, color, brightness and hue, dynamic system contrast, noise reduction and day view, and the image intensity remains constant even when the lights are on or strong sunlight illuminates the room. 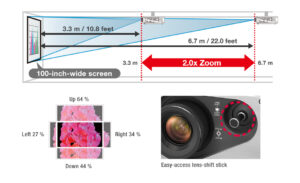 Panasonic has equipped the PT-FRZ60 projector with advanced image controls and an optimization function such as Rich Color Harmonizer, which optimizes the color wheel rotation timing depending on the image field to allow vivid, rich colors to be displayed. Solid Shine technology tries to keep the brightness of the projector at the same level as the power of the laser diodes slowly decreases over the long life of the projector.

During the test, the Panasonic PT-FRZ60 started in 15 seconds and immediately switched to full brightness. The Quick Start menu item allows you to restart immediately for up to 90 minutes after the projector is in standby mode. When done, the PT-FRZ60 shut down in 2.3 seconds, making it an excellent choice for a room that is used by different people for different purposes during the day.

There are seven imaging modes, the system can be set to natural or normal mode, while the DICOM Sim setting is for analyzing the device. A bonus is that these modes can be modified and saved. However, there is no support for projecting 3D images.

The dynamic mode was a big surprise for the PT-FRZ60 projector, as the system issued 6,990 ANSI lumens as measured. On the downside, as seen in the brightest mode of most projectors, the images were predominantly shades of blue and green.

The PT-FRZ60 performs well when projecting movies with Cinema mode. The projector does not have an sRBG projection mode, but has a REC709 setting that attempts to achieve colour balance on a high-quality flat panel display. With 4640 lumens, it created the best color balance, with a surprisingly good balance between skin color and natural scenes. The projector’s DICOM Sim mode can be used to project black and white images; It issued 5,500 lumens.

The energy consumption of the PT-FRZ60 is controllable and economical. It consumed 403.1 watts at full power and 10.3 watts at idle. A lower power standby mode is also available. If the PT-FRZ60 is used eight hours a day, 200 days a year, it will not be too expensive to operate.

In ECO mode, the projector’s performance has varied between 5330 lumens in dynamic mode and 3590 lumens in natural mode. Regardless of the mode selected, it used roughly 320 watts.

There is also a quiet mode, the projector has a fairly low noise level, barely 30 dB in this mode and 35 dB in normal mode.

We screened the 2017 action film Overdrive. The projector performed very well, delivering vivid colors and sharp images. The black level was also adequate, although it lags behind the image quality of projectors with traditional glass lenses. The previously tested JVC DLA-RS3000 home theater projector cannot be surpassed by a Panasonic projector. The main advantages of laser projectors are their long life and the fact that they require almost no maintenance, but the price can be higher than that of real glass lens projectors. . However, with projectors with real glass lenses, the lenses have a shorter lifespan and are quite expensive to replace. It is up to everyone to decide which aspects are more important to them, perfect image quality, or long life and cheap maintenance.

For this projector, the ultra-wide double zoom, mechanical shift, low maintenance, and brightness of at least 6,000 lumens are truly compelling capabilities. However, it lacks built-in WiFi, which can be compensated for by using Panasonic’s wireless system. Brightness decreases when you need to use the lens in the longest zoom position, but if you are careful to position it, you can eliminate this problem as well. All in all, the PT-FRZ60 is an ideal reception for anyone due to its image quality, flexibility and long maintenance-free life. It’s not equipped with built-in speakers, but that’s not a big downside, as home theater owners usually don’t forget about the right sound system either. When building a home theater system, the first step should be to manage the acoustics of the room if you want to achieve a true cinema experience. To improve acoustics, use deep sound-absorbing membrane panels and diffuser elements. Place bass traps in the corners and acoustic curtains in front of the windows. Even the best speakers only sound good with perfect acoustics!