Parasound products are characterized by high-quality sound. The head of the company, Richard Schram, founded Parasound in 1981 in San Francisco because he found the price of audio products on the market too expensive, which proved unaffordable to many. He thought that in order to produce good quality devices, it is not necessary to spend huge sums of money and so good quality audio and hi-fi products could become available to more people.

Parasound products are still manufactured in the Far East, Taiwan, however, it can be said that this brand is characterized by a very favorable price and high quality. Another important figure in the company is John Curl, who was born in 1942 in San Francisco, California. Initially, he was involved in the design of tape recorders, then in the 1970s he joined Marc Levinson, where he designed pre- and final amplifiers. After that, he became an independent consultant and worked for several electronics companies. It strictly adheres to its professional principles and does not allow the devices it designs to be redesigned, simply to make them simpler and cheaper to manufacture, or to replace the high-quality parts it requires with cheaper and poorer ones. That’s why he decided to start his own company in 1983, create the Vendetta preamplifier, then further develop his skills and in 1989 he joined Parasound.

The 2125 V2 is a fairly heavy-duty Class AB power amplifier with a standby switch, A-B speaker select button, and a dual channel display on the front. The front panel has rounded corners.

It is equipped with two-position, sensitive trigger sockets and a speaker switch that allows the two outputs to operate simultaneously. A fine-tuning function, a surface-pass filter and a gold-plated banana plug speaker cable connectors are also included on the device. The cable connector clamps are black and red, making connection much easier. 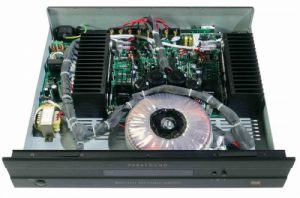 It has a toroidal transformer and large heatsinks. It has a power of 8 Ohmon 150 Watts per channel, 4 Ohmon 225 Watts when connected to a bridge, although it can have a power of up to 400 Watts with minimal distortion. The frequency transmission is between 20 Hz and 50 kHz, the signal-to-noise ratio is 114 dB, the input impedance is 33 kOhm and the device weighs 12.3 kg.

Gold-plated RCA inputs, 24K, five-way speaker terminals, and an overheat indicator are also included in the power amplifier features. Quiter and Louder, ie quieter and louder settings, are also available. To meet Energy Star and EU power requirements, the NewClassic amplifier requires only 0.5 watts in standby mode. Due to the low heat production, the amplifier can be placed on a shelf or in a cabinet. Class “A” circuit operates efficiently and generates much less heat compared to “Class A” circuits. It also has an auto on and off function, so if the amplifier detects the audio signal, it will turn on. The buttons on the touch screen light up in standby mode.

What is the difference between a preamplifier and a power amplifier?

The preamplifier is used when the incoming signal is weak and therefore the standard amplifier detects noise. An amplifier has its own optimal amplifier range, weaker signals must be pre-amplified, then these signals are sent to the output amplifier by the preamplifier, and the signals are output from the output amplifier to the speaker. The output stage is used when the high volume can only be produced with distortion by a standard amplifier. The power amplifier has a simpler design, no equalizer, tone control, effects,, etc. Its main function is to significantly amplify and send the incoming signal to the speaker. The power amplifier can be used on its own, connected to speakers, but it delivers a slightly rawer, more natural sound, which is a matter of taste for who likes and dislikes. It has a lower loss compared to the “A” class, but is not distortion-free.

We launched a music concert DVD from Metallica, Worldwired Tour Live in Europe, to test the Parasound power amplifier. Listening to the concert recordings of the legendary band, we had a dynamic, full-bodied sound experience, an open stereo stage image characterized the product of the power stage. The test took place in a cinema room, a room of about 25 square meters, where acoustically there is still work to be done in the future. Although some sound-absorbing panels have already been placed on the walls, it will be absolutely necessary to fix diffuser panels in order to properly handle the reflections. We paired the device with a Primare Pre35 preamplifier and Klipsch R-620F standing speakers. We were pleased, the bass sounded beautiful and clean, intense, and the sound of the other ranges was ideal as well. At the lower frequencies, however, not everything was dreamy, we lacked tension, and the depth of the stage sometimes sounded a little confused. It was not always possible to separate the instruments from the vocals, so there was still room for improvement in the detail and tightness of the low frequencies in the sound of the instrument.

The Parasound power amplifier can be a favorite of audio fans due to its extremely affordable price, quality design and pleasant, ideal sound. However, we cannot say that the sound of the device is flawless. It’s okay in terms of dynamics and fullness, openness of the stereo image, but the deep ones could be tighter, and we also lacked detail. We would give 4 and a half points out of 5 points to the final stage if we had to classify.