We have tested the Sony STR-DH590 5-Channel AV Receiver!

We have tested the Sony STR-DH590 5-Channel AV Receiver!

We tested Sony’s latest entry-level AV receiver, the STR-DH590. With this receiver, Sony has done a nice job of offering a great device with the necessary features at an affordable price. 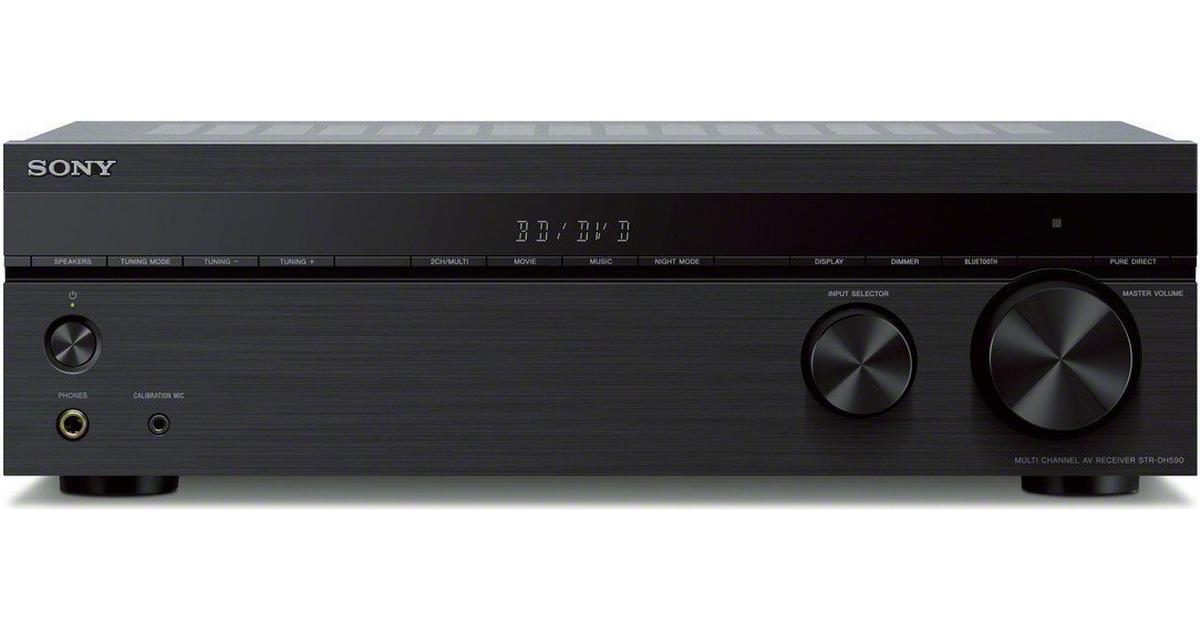 The STR-DH590 is a 5.1 channel receiver (it has two subwoofer outputs but handles them independently), with Dolby TrueHD and DTS-HD Master Audio decoding and on-board DSD decoding. The manufacturer promises 145 watts of power at 6 ohms, 1 kHz, 0.9 percent THD, driving one channel.

Sony has abandoned the networking features built into many more expensive AV receivers than this model – and thus offers the device at a much better price. So don’t expect extra features like AirPlay, Chromecast, and DTS Play-Fi, or features like Spotify, Pandora, TIDAL, and TuneIn. It only has a Bluetooth 4.2 connection.

Not surprisingly, for an entry-level model, the STR-DH590 has a slimmer design than an average AV receiver – smaller and lighter than, for example, the Onkyo TX-RZ900.

The front panel is available in a simple but elegant design, in brushed black, with two buttons for input and volume, a headphone output, and a long row of black buttons for various tasks (speaker on / off, FM tuning, sound mode selection, Bluetooth, Pure Direct mode, etc.), has a medium-sized LCD display.

The back panel has a modest amount of input, four HDMI 2.0a inputs with HDCP 2.2, and a single HDMI 2.0a output with Audio Return Channel.

HDMI inputs 1 and 2 are labeled Media Box and BD / DVD, which accurately indicate the source types. We paired the receiver with a Sony UBP-X800M2 Blu-ray player and also played music content from a computer and iPhone 8 via Bluetooth. It was easy to pair the Bluetooth devices with the receiver (there is a pairing button on the remote control) and the connection remained stable after pairing.

The back panel also has a coaxial and an optical digital audio input, as well as four stereo audio inputs, two subwoofer outputs, and an FM antenna input. A single Type A USB port is available to power the connected mobile device, but it does not support media playback.

The speakers can be connected with a pair of five-way mounting posts for the main left / right channels, but only small spring clips are available for the other three channels. We tested the AV receiver with a pair of Dynaudio Confidence 60 stationary speakers.

The DH590 installation process is extremely simple. After connecting the speakers, sources and display, selecting the desired language on the receiver, the on-screen menu will give you precise instructions on how to connect the supplied microphone cable to run the Sony DCAC auto setup.

The receiver comes with a small remote control, roughly the size of what Sony usually comes with Blu-ray players. There is no backlight, but it has a transparent, logical layout – the source buttons are grouped above (including the dedicated Bluetooth source button), the sound modes are just below it, the navigation / display buttons, and the volume and controls (other set-top boxes). and below.

When you enter the main menu, a black and white OSD appears with five options: Watch (to select the HDMI source), Listen (to select the audio source), Easy Setup (to run the initial setup again), Sound Effects (to select the listening mode), and then the Speaker settings .

The remote control also has an Options button that adds some extra features to the toolbar: Pure Direct on / off, Sound field selection, Night mode on / off, Dual Mono and AV Sync. You can adjust the speaker size / level, HDMI inputs, select digital audio inputs, bass and treble, perform AV synchronization, and HDMI settings such as ARC. By default, all four HDMI inputs are set to Standard, but to send the full 4K / 60p 4: 4: 4 HDR signal, the BD / DVD and Media Box must be set to Enhanced.

Performance of the Sony STR-DH590

For music, the DH590 offers direct 2-channel stereo and multi-channel sound modes, as well as DPL II Music, Enhancer (to improve lower quality files) modes, and modes such as Hall, Jazz, and more. The testing was performed in a living room where diffuser acoustic panels were placed on the walls and sound-absorbing ceiling panels hung from the ceiling, thus ensuring proper acoustics. Controlling the acoustics of the room is essential for the ideal sound. Absorption panels with diffuser-Two in one product performs two functions at the same time, as it ensures the absorption of deep sounds and the proper sound dispersion in space.

We started the test with Martin Garrix and Bono & The Edge’s song-We are the people. Sony produced accurate and clear sound with proper dynamics and surround sound. He controlled the sounds properly even at higher volumes.

We continued the rehearsal with the 2018 sci-fi film Replicas. The DH590 AV receiver has both excellent 3D and HDR10 capabilities.

The sound of the Sony DH590 amplifier may seem a little too rough and brittle to some, so if you like the soft, warmer sound, this device may not be for you. The DH590 also performed well with stationary speakers, but perhaps even better when used with bookshelf speakers and subwoofers in a smaller room.

There is no network, IP control or other special control options such as RS-232. It is truly designed for a one-room system that can be controlled with a universal remote control.

Other brands have similar models at similar prices. The Denon AVR-S540BT and Yamaha RX-V385 five-channel are also equipped with Bluetooth (no network service) and HDR10 / Dolby Vision / HLG functions. Both are equipped with a USB input that supports high-definition audio playback, and the Denon is also equipped with an extra HDMI input.

Onkyo does not offer a five-channel model, but the price of the new 7.2-channel TX-SR383 AV receiver has been reduced by the manufacturer. However, Dolby Atmos and DTS: X decoding and Dolby Vision support are missing. Like the DH590, it lacks network functionality.

For a 5.1-channel HT system, combined with a bookshelf or floor-standing speakers, a Sony AV receiver may be an ideal choice. It is very easy to set up, easy to use, and supports important AV technologies. If you want a device with simple and basic functions, at a good price and without the need for extra capabilities, then this buyer is just for him. Most importantly, the STR-DH590 doesn’t save on performance, so we won’t be disappointed in this area. However, if one insists on the extra features of more expensive AV receivers, choose another modell instead.