We’ve tested the Sony BDP-S6700 blu-ray player before, and we were curious about what experience we’ll gain from the company’s other model. 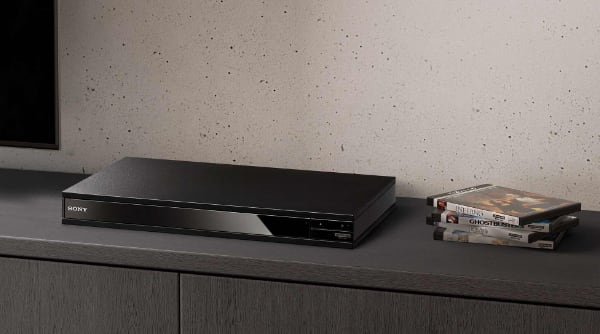 The appearance of the UBP-X800M2 is characterized by a square, slightly rough style. A glassy black stripe runs on the front of the metal housing. The workmanship is high quality, the player is rigid and stable thanks to the metal housing, despite having a rather sleek shape. The rugged metal housing is designed to eliminate minor chassis vibrations and electrical disturbances that can affect sound quality.

The Sony UBP-X800M2 has a metal heatsink and a disk drive. However, the remote control was disappointing. Cheap plastic that doesn’t fit the metal body of the player at all.

Features of the Sony UBP-X800M2

It has a wide disc tray, hi-res audio support, limited streaming options, and does not automatically detect Dolby Vision. A big novelty of the Sony UBP-X800M2 is the support for Dolby Vision. The original X800 did not offer this feature.

Compressed audio formats can also be played back with Sony’s DSEE HX function, which magnifies the frequency transfer and dynamic range to get as close as possible to the sound of the original recording. The X800M2 can play both Dolby Atmos and DTS: X object-based audio formats. Sony’s new 4K player can handle a wide range of video file formats via network or USB drives, including XVID, WMV, AVCHD, MPEG-2 and MPEG-4 files. It also has an Ethernet port, built-in Wi-Fi / Bluetooth, and a front USB port.

The connections on the back of the device include dual HDMI and coaxial digital audio output – and finally, it should be mentioned that the Bluetooth connection supports LDAC technology. This improves the sound quality by providing three times the data of normal Bluetooth connections. The X800M2 does not include a built-in multi-channel audio decoder such as the Panasonic UB820, so there is no multi-channel analog line output either. However, this is not a big loss.

Testing was performed in a relatively large movie room where a Sony projector was used to project the film. The sound quality of the home theater system was provided by a Focal Chora speaker system and was associated with an Onkyo TX-SR393 amplifier. The acoustics of the room were quite good according to our measurements, thanks to the sound-absorbing acoustic panels, but for perfect sound, we recommended our client to place diffusers as well to balance the sound.

If you have a projector or low-brightness TV, you’ll be pleased to see that the X800M2 has the ability to convert HDR to SDR, so you can also enjoy the benefits of 4K Blu-ray extra resolution.

The player also has extra control options – including compatibility with Crestron, Savant and Control4 functions – and extra, custom installation-friendly connections such as IP control via Cat-5 or Wi-Fi, as well as an RS-232C there is also a bidirectional control port and an IR input on the device.

If the TV sees the incoming content in Dolby Vision format, it adjusts the playback accordingly, causing problems such as over-accentuated skin colour, elevated black levels.

It transmits motion clearly and sharply, whether you’re watching a 24p movie on a disc or 50 / 60Hz streams from built-in applications.

In terms of sound quality, this blu ray player is excellent. His musical abilities are also remarkable. The DSEE HX feature does a great job of making compressed digital sound richer, fuller and more dynamic.

You may want to buy the Sony UBP-X800M2 player if…

… .We want excellent 4K performance and don’t need Dolby Vision or HDR-SDR conversion functions. The UBP-X800M2 is excellent for HDR10, 4K Blu-ray, HD Blu-ray and other types of audio and file playback.

If you want HDR10 + playback, the Panasonic UB820 may be a better choice.