Sony’s 4K projectors can rightly be rivals to JVC projectors with similar features. The VW 570ES projector has 1800 lumens of brightness, motor focus and zoom, and motorized lens shift functions. At 14 kg, the noise level of the device is 26 decibels, and the lamp life of the manufacturer is about 6000 hours. (Depending on usage.)

Let’s take a close look at the projector!

There are ventilation holes on both sides of the lens to ensure proper ventilation. It has two HDMI inputs on the side, both of which support 18 Gbps 4K HDR transmission, which means it is capable of 60 frames per second. USB, RS232, IR minijack, 2 x 12 V trigger and Ethernet connectors are also available on the projector.

The Sony 4K UHD logo is visible on the top of the projector, the connections are recessed in the chassis, so it can be hidden when placed on the ceiling or table. The glass lens is in the center, and a power LED is located above the lens. Unfortunately, the fingerprints on the glossy plastic front appear pretty quickly. Surrounded by a bronze-effect lens collar, the lens is protected by a plastic cover that slides to the front of the lens when not in use. This can cause problems with ceiling mounting because this small blanket can be in the way.

The remote control is large, well-designed, easy to see and easy to use. The high-pressure 280-watt mercury lamp has a lifespan of 6,000 hours when used in low mode, but with 4K HDR content, this lifespan is expected to be shortened. The contrast is 350,000: 1.

Native 4K SXRD (Reflective Display with Silicon X) technology offers 4096 x 2160 resolution. We recommend the Sony projector for medium and larger cinemas. For a 100-inch image, a distance of 3.05 to 6.28 meters is recommended, and for a 120-inch image, 3.67 meters is the ideal distance.

In testing, the Cinema 1 picture mode seemed brighter with a bit of a TV effect, and the Reference and TV modes were less contrasting. If you’re not using the projector in complete darkness, Bright Cinema is the best choice, but for us, True Cinema has turned out the most. The projector is quite noisy during operation, but if used in a movie room with a good sound system, it probably won’t even show up. The 3-chip SXRD projector proved to have better light control, deeper black levels, and better dynamic contrast and dynamic iris.

The device also has a CMS colour management system and two-point white balance control functions. HDR10 and HLG compatible, but does not support Dolby Vision and HDR10 +.

Projector or TV? This is the question!

The screen size of TV sets is limited, they can be quite heavy, which makes transport and installation more difficult than in the case of a projector. Projectors can project almost any image size, depending on the type and size of the room. They are very easy to attach and place, but you also need a screen of the right size and quality, which in turn can take up quite a bit of space. In terms of picture quality, LCD and plasma televisions are almost unbeatable for the time being. Projectors can project more vivid and natural colours. The contrast is clearly better than TVs because, due to the reflections, the light projected by the projectors reduces the contrast unless it is completely darkened in the room. 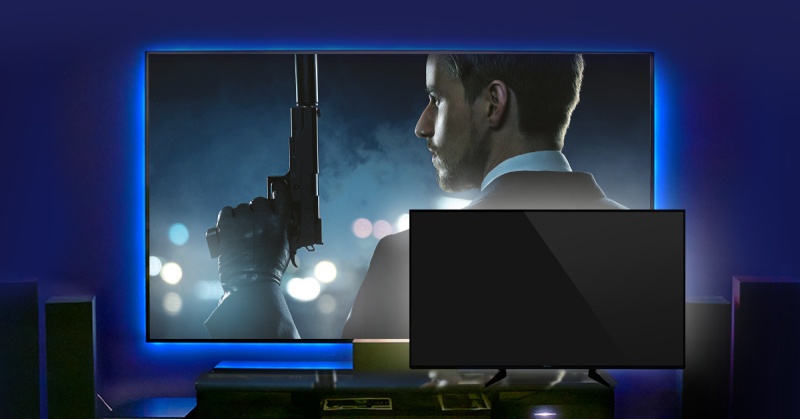 The projectors are primarily recommended for watching movies, home theater systems, using an unnecessary projector to watch simple TV programs, because standard definition images will look awful on a large screen, and the life of the projector lamp is shortened by too frequent use. The lamp life of projectors is also finite. Of course, it also depends on the use, but lamp replacement is a very expensive pastime, laser projectors are an exception, but if you choose a laser projector, you have to reckon with the fact that the image quality will not be perfect. Even the most expensive and best quality projectors have base noise during operation, which can be annoying for some. TVs have a myriad of inputs and additional functions, while projectors only have basic inputs. 3D content projected by projectors, on the other hand, is more perfect and better than TVs.

Overall, it can be said that televisions are more versatile, have better contrast, and do not require a projection screen, which can take up a lot of space. However, if you want to choose a device for your home theater system, watching movies, we recommend projectors.

Come to the cinema!

The projector is connected to an approx. We tested it in a 30-square-foot living room, where acoustic panels were used to improve the sound of the room to ensure the ideal sound of the home theater system, and traditional curtains were replaced with thick, densely woven sound-insulating acoustic curtains, thus not only improving acoustics but complete dimming. 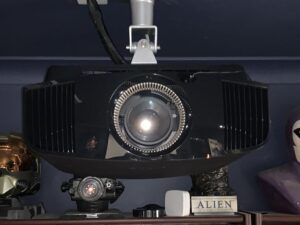 The image projected by home theater projectors will only be sharp and clear if the room can be darkened almost completely like in a real cinema. We watched the 2014 thriller Before I go to sleep. Nicole Kidman and Colin Firth are the protagonists of this exciting cinema, the mystical atmosphere of the story is quite mystical. The Sony projector produced sharp, clear images, beautiful, natural colours, the contrast was flawless and the black level was deep and intense enough. We watched the movie in HD content, there was absolutely no problem with the quality. We also tried the image settings, the colours turned blue at pure white mode, so we neglected this.

Next, we watched the sci-fi, thriller film The Darkest Minds, which was shown in 2018. The performance of the Sony projector was perfect, the depth of the black levels was flawless, we also saw the colours and contrast perfect.

The designer of the VPL-VW570ES projector is definitely to be commended for producing a projector whose image quality is close to that of a television screen. The black level is intense, detailed and natural for the quality of the projected images, the colors are beautiful and vibrant. Compared to the JVC DLA NX7 projector, we liked Sony better, but we also found something objectionable here, such as the fact that a separate image setting is required to use SDR and HDR, and this projector is quite noisy in full mode. The latter problem can be avoided if your home theater sound system consists of premium quality speakers. Don’t miss out on the acoustic treatment of the rooms, because even the best speakers can’t deliver flawless sound if the acoustics aren’t right!