We have tested the NAD T787 AV receiver!

We have tested the NAD T787 AV receiver!

The NAD brand became known in the 1970s. It was purchased by a Canadian company in 1999, but continues to strive to retain the specifics and unique style of NAD. 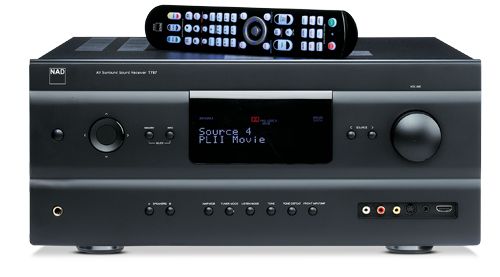 The exterior design of the 7-channel amplifier is characterized by simplicity and aesthetics, with a large volume control knob on the front panel. There is no hinged lid that would hide even more control buttons hidden behind. The large display is very easy to read, the menu system is clear and transparent. The buttons are quite sensitive, the device itself is quite large and heavy with its 25.2 pounds. The power of the amplifier is 200 Watts per channel, 8 Ohmon. Thanks to its modular design, it can be further expanded with HD Audio, High End Audio, Video, 3D, HDMI expansion and High End video modules.

The connectors are gold-plated, the signal-to-noise ratio is 93 decibels, and the frequency transmission is between 20 Hz and 20 kilo Hz. It is equipped with an AM / FM radio receiver, seven HDMI inputs, three component video and four S video inputs, as well as 3-3 optical and coaxial digital inputs. It also has a headphone jack and seven channels and two subwoofer outputs among the amplifier’s functions. Hiding behind a protruding panel, we find another A / V input. It has 3D, 1080p / 24 support, as well as Dolby True HD, Dolby Digital Plus, DTS HD decoders, and the AV receiver also has a multiroom function. The automatic speaker setting and the measuring microphone are also among the functions of the amplifier. It works with a large toroidal transformer. 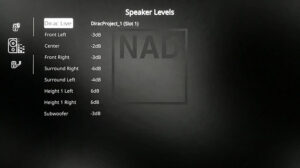 We have also discovered XM, iPod ports, and of course we can use the Audyssey MultiEQ XT calibration system with this device. We can make the settings with the help of the measuring microphone. Thanks to EARS surround mode, it can convert stereo sources to multi-channel, and in direct mode it can transmit non-digital, analog signals such as those from turntables, or phono preamplifiers. It is extremely easy to set up and did not cause any difficulty.

Two remote controls are included with the T787. One is used to control the second zone, the base has a large remote control backlight that, as we take it in hand, illuminates virtually instantly. You can also control how long it lights up. It works with four AA batteries, the batteries in the battery compartment rattle a little. Otherwise, the remote control fits very well in the hand, it has logically arranged buttons on it. The settings in the room calibration software were quite accurate. This was also a pleasant surprise because, otherwise, room correction programs alone cannot make perfect settings, as they primarily measure sound pressure, they cannot adequately compensate for room acoustic errors. This is also why if you want to get an ideal movie or music experience, be sure to pay attention to the acoustic improvement of the rooms as well.

We tested the amplifier in an average living room located in an apartment in an old condominium. The walls were made of brick, the furnishings were classically elegant. We gave the owner some tips on how to improve the acoustics, as the measurement resulted in reflections and standing waves that significantly degrade the sound. It will definitely be worthwhile to place sound-absorbing and diffuser panels on the walls in the future. We started testing with a pair of Dali Oberon 7 standing speakers and a Velodyne SPL 1200 Ultra subwoofer.

The rehearsal started with a movie. In 2008, the American adventure film The Mummy- The Tomb of the Dragon Emperor was released, and we began testing the amplifier. We experienced tight, precise sounds, proper dynamics and intense bass. The amp provided solid bass and a natural, lifelike sound. We then watched the musical, romantic film Coyote Ugly. We were also curious about the musical details and we didn’t have to be disappointed. We were able to enjoy accentuated mid-ranges, percussive bass and balanced clear sound.

For the benefit of audio fans, we also tested the amplifier for listening to music. We listened to the song Imagine Dragons Natural. The device delivered a very nice, balanced stereo picture, the bass was also absolutely in place and sounded quite intense, tight and accurate. However, we also discovered flaws in the sound. The treble was often too vivid and we lacked detail and subtlety. 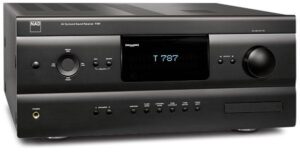 The NAD 787 AV receiver has a very pleasant, exterior design, a simple and clean look. We could experience tight sounds, intense bass and accentuated mid-ranges. Thanks to the resonance-free housing, we were able to enjoy truly distortion-free, clean results. The stereo sound was also excellent, we can report harmonious, balanced sounds. We have found that the higher the sound pressure level (SPL), the better the amplifier can sound. However, there is still room for improvement for designers in terms of detail and subtlety, and it would be worth refining the confusing, sometimes excessive vividness experienced in the case of high tones. What was even more negative is that this amplifier has quite a few features. In this price range, however, much more features would be expected.

When choosing amplifiers, keep in mind that you want to use it for listening to stereo music or watching movies. There are models that are an excellent choice in both cases, the T787 is one such model.