This is the largest model in Yamaha’s Aventage AV receiver range. The Japanese company Yamaha has been in business since the 19th century, selling engines and audio-hifi products. 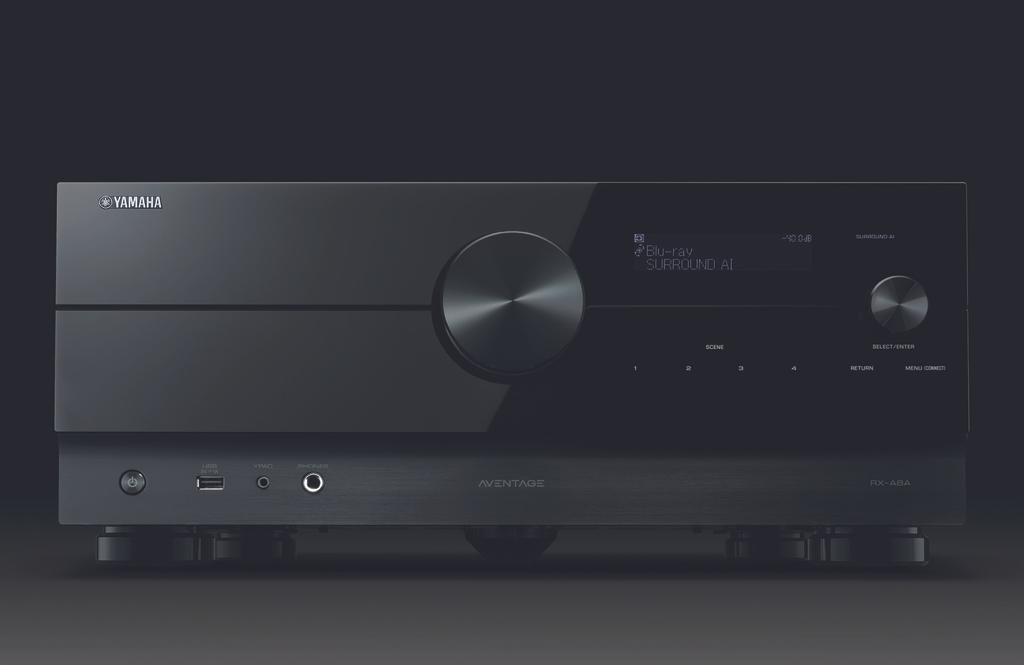 You can also control the unit with voice commands and use the input microphone to further fine-tune the settings. USB connection, 3 optical, 2 digital coax, 6 analogue audio, 1 component video, 2 composite video inputs are available on the amplifier. Of course, it also has a headphone output, 12V trigger output, AM/FM tuner.

The 11 power channels will fully serve the 7.1.4. speaker layout. When two subwoofers are used, the RX-A8A can actually distinguish between bass tones. The user manual clearly explains all possible arrangements, including how to connect each speaker.
To further simplify setup, Yamaha provides setup options via iOS and Android, with an app called ‘AV Set-Up Guide’. This not only helps you with the layout of the speakers, but also with connecting all the sources.

These are available with seven HDMI inputs, each capable of 4K at 40 Gbps. The RX-A8A has a main HDMI output with eARC for playing audio from a connected TV, a second HDMI output that does not have ARC or HDMI control, and the aforementioned third HDMI output for an additional zone.

In addition, there are only 5 audio inputs – one optical digital, one optical or RCA analogue, one coaxial digital or RCA analogue, a pair of balanced XLR inputs (there are also XLR pre-outs for the left and right front output channels), finally a phono input for a turntable with a grounding column. As well as Ethernet, trigger and IR connections, there’s a DAB+/FM antenna socket (and tuners within that, of course), while the front panel has a headphone socket.

The only USB-A socket is also on the front panel, which is a bit inconvenient if you want to use a hard drive with, say, music files, but handy for connecting a quick connector. However, there is no USB-B connection for computer playback. There is, of course, a backlit remote control.

The Yamaha MusicCast streaming and multi-room platform offers the possibility of streaming music.
We used the remote control to adjust the distance between the speakers and our volume settings. The settings were quick and easy to make. We connected the amplifier with a pair of Focal Chora 826 speakers and SVS SB 4000 subwoofer.

When you buy a high-end receiver, you can expect that the manufacturer has paid attention to every detail. Using quality components, they’ve built a rugged and flawless enclosure. The design has been changed from the previous model. The main volume control knob has been made larger, making it easier to use. Gone is the wide, central display with its many small lights; gone is the large cover that housed the front inputs and controls. On the right is a smaller input selector with four Scene buttons to choose the settings you want.

One surprising change to the design of the unit’s box is the ABS plastic cover. Its glossy front panel is very eye-catching and looks less rigid than metal housings. The RX-A8A is quite large for its size. Underneath the top plastic cover is a new perforated metal casing that provides additional cross bracing to the chassis, which Yamaha says doubles the rigidity of the structure compared to previous Aventages. 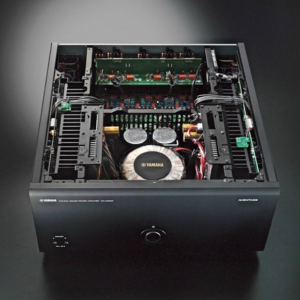 The Aventage was tested in a large living room that is also used as a cinema room by the owner. Due to the minimalist style of the room, there was not a lot of furniture and wall decoration in the room. A few printed acoustic panels had been previously installed on the walls, but this was not enough to achieve perfect acoustics. Acoustic measurements were taken in the room and it was determined that more corner bass traps and diffusers would be needed.

The large expanses of glass provided a wonderful view of the landscape, but unfortunately they were not really beneficial from an acoustic point of view, as the windows reflected the sound. The resulting reverberations spoil the sound. To solve this problem, we recommended acoustic curtains, which improve the acoustics and also provide the necessary blackout for cinema.

Using the YPAO room correction system, we have been able to refine the sound, but only after a full acoustic treatment of the room can we expect a flawless result. Room correction programmes alone cannot solve the more serious acoustic problems.
The Yamaha Aventage amplifier was put to the test while watching several movies and we were very pleased with its performance. It delivered a clear, detailed sound with solid bass and a coherent soundstage.

We also put it to the test when listening to music. The radio amplifier, thanks to MusicCast, also makes Spotify, Tidal, Qobuz, Amazon and Deezer available, as well as unsubscribed streams such as internet radio. The stereo sound image was fine (although it couldn’t outperform stereo power amplifiers), filling the space nicely with music. We heard realistic and enjoyable musical performances.
There were 11 modes to choose from, to suit 11 different musical styles. We had a lot of fun with these, they proved very useful, for example, when we needed to increase the volume of the sound field, the mode we chose.

Playing with the soundscapes was also a good thing when we played whole albums. The most correct setting was “Standard”.
If you want to listen to real Atmos music, using Tidal or Apple, you’ll need a bit of luck. If you’re not choosing music exclusively from a playlist, you’ll also need a bit of luck to find Atmos music.

This amplifier is a top-of-the-range receiver in terms of both functionality and performance. The MusicCast will receive regular updates, with the manufacturer promising that 8K/60A, 4K/120A and HDR10+ support will soon be available, as well as 8K/60B, 4K/120B and VRR, ALLM, QFT, QM support for games.
When streaming, the quality of music has degraded, but not significantly. The stereo effect was satisfactory. When watching movies, we experienced dynamic, clear and detailed sound with a spacious, realistic sound and intense bass.
The price is not the cheapest, but as it’s a high-end speaker, that’s not surprising.