The Yamaha RX-V series has been around for a long time, with many changes made by the manufacturer compared to the first models.

Most AV receivers have square corners, usually a large display with blue or yellow letters in the middle, and a few buttons on each side. However, the appearance of the Yamaha RX-V6A is different than usual. It is characterized by curved lines and a very large volume control in the middle.

To the right of the button is a display that shows similar information as previous models, but it’s an LCD, OLED display with blue letters and a black background. The input selector is located to the right of this and it is a rather small button. Below the display and selection key are six touch keys on the front panel that replace the older keys.

The front panel also has a 3.5mm input for the calibration microphone, a 6.35mm output for headphones and a USB port. The Yamaha RX-V6A uses Apple AirPlay 2 to play iPhone music. But you can also use the Yamaha MusicCast app on your Apple or Android device. With MusicCast, you can stream music using Spotify, Tidal, Deezer, or Amazon Music.

Yamaha MusicCast’s network audio system is also a very carefully crafted, multi-room system. You can listen to music anywhere in your home through MusicCast devices. Moreover, this feature has been enhanced so that you can now configure separate wireless MusicCast speakers.

The amplifier has a rated power of 100 W on all seven channels, with 8 Ohm. If you want to use lower impedance speakers, there is a setting for this in the menus, although unfortunately the 4 Ohm speakers are only supported by the first left and right channels. In all other cases, the six-ohm rated impedance is the minimum (and it is perhaps no coincidence that most Yamaha speakers have a six-ohm rated impedance). 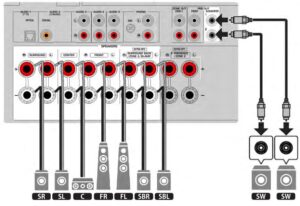 There are seven HDMI inputs. Yamaha promises that more advanced features such as 4K at 120 Hz and HDR10 + video signals will be supported with a firmware update in the future. We tested the device with normal Ultra HD, HDR10, and Dolby Vision high dynamic range, and none of them caused problems for the amplifier.

As an additional update, the device is equipped with a number of features dedicated to games: Automatic Low Delay Mode, Variable Refresh Rate, Fast Media Switching and Fast Frame Transfer. These essentially serve to reduce delays. Delay is the biggest disadvantage of real-time games.

There is only one HDMI output. There are three stereo analog inputs and a phono input on the receiver. It also has optical and coaxial digital audio inputs. Ethernet, Wi-Fi and Bluetooth connections are also available. Wi-Fi is dual-band, while Bluetooth is version 4.2 and supports the standard SBC codec as well as the Apple-friendly AAC codec. It is a radio receiver, so of course FM and DAB + digital radio are also available.

The amplifier is equipped with an infrared remote control, but can also be controlled with the MusicCast app on a smart device, Apple or Android, phone or tablet.

For the Yamaha RX-V6A, it is up to us to complete the calibration. When connecting the included calibration microphone, place it at head height, in the listening position (you can try multiple positions if you like). Once the microphone is connected, the Yamaha YPAO calibration system appears and you can easily follow the on-screen instructions.

We tested the amplifier in a relatively large movie theater, connected it with a pair of Dali Epicon 8 floorstanding speakers and an Oppo blu-ray player. The testing was performed in a medium-sized cinema room where acoustics treatment is already underway. For now, sound-absorbing panels have been printed on the walls, and the sound is properly dispersed by Skyline diffusers. There will also be a corner bass trap in the corners in order to balance the deeper sounds as well.

We watched the 2017 mystical thriller the Seven Sisters and the film L’Empereur de Paris, released in 2018. We found the sound quality of the movies simply amazing. Plenty of energy was available to create a cinematic sound for the system. The crossovers worked efficiently on the sound of the bass and its transmission to our subwoofer. The surround sound was also excellent.

The automatic sync available when connected via HDMI was effective. In fact, all the HDMI control functions worked well.

In terms of music, the receiver actually did a very nice job, even when connecting the turntable. The sound was clear, with decent stereo imaging and detail, whether we listened to a classic or a more modern genre.

HDMI can also magnify video to 4K (Ultra-HD) resolution. This was off by default. We turned it on, but at first it didn’t seem to work. This was because this feature is quite limited, it will calibrate the image from 1080p to 2160p, but it will not work with less.

Also, when we tried to play an Ultra-HD disc with normal HDR with 4K zoom turned on – you shouldn’t have done anything with such a disc – the TV no longer took a picture. Only a black screen appeared, with the HDR logo flashing in the corner of the screen. The on-screen menu of the receiver did not work in this case either. After stopping playback, (the player returned to 1080p), the 4K setting was turned off, and proper operation was restored.

There are four “Scene” buttons on the receiver’s remote control, similar to those on the front panel. Pressing and holding one for a few seconds stores the receiver’s current settings, including input and audio and video modes. This allows you to switch to Phono input and Pure Direct, for example, at the touch of a button. You can then return to watching the movie by pressing another button. It is very useful and convenient to handle.

Yamaha’s networking capabilities are well-designed and therefore work reliably, whether over a Wi-Fi or Ethernet connection.

All the music we listened to was effectively reproduced by the amplifier. This included FLAC-encoded PCM up to 24 bits and 192 kHz sampling, as well as dual-speed Direct Stream digital. We found that Yamaha receivers remained the only ones to which DTS 5.1-channel audio taken from DTS CDs and encoded in FLAC could be routed.

This amplifier is a great, not-so-entry-level network and modern, smart AV receiver, and the new exterior design makes it clear that it’s a 21st century unit. If you want true surround sound and a clear, powerful music experience, you should definitely choose a Yamaha product.