Marantz is the world’s leading audio and hi-fi brand, thanks to state-of-the-art audio enhancements and clear sound. The company was founded in 1953 in the USA by Saul B. Marantz. Marantz’s patented Hyper Dynamic Amplifier, or HDAM modules, are used to produce the clearest sound audio and hi-fi products, providing extremely wide bandwidth and detailed production.

The SR8012 home theater amplifier has 11 stages, each capable of outputing 205 watts of output power when driving one channel, and outputing 175 watts when driving two channels.

On the front of the device there is a circular, small display and two large dials, one for volume control and the other for input selection. Hidden behind a hinged cover under the display hides a much larger display where other controls and sockets are located.

Inside the housing, a large toroidal transformer and two heatsinks, also of considerable size, ensure stable performance. Using a Hyper Dynamic Amplifier, or HDAM circuitry, detailed sound and extended bandwidth are also guaranteed with this amplifier. The amplifier was manufactured using high quality components that received a base plate copper coating. Teflon tape is used in the circuit for better attenuation.

The appearance of the SR8012 amplifier is almost identical to the design of its predecessor, the SR7012. What sets it apart from the previous model is that this amplifier lacks the AM / FM tuner needed for analog radio, but has a couple of RCA connectors. 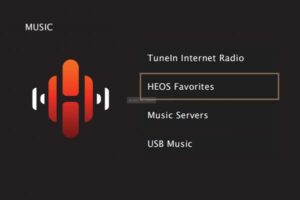 With a network internet connection and the built-in Tuneln internet radio, you can listen to the radio.

On the back there are 8 HDMI inputs, 3 HDMI outputs, all of which are UHD compatible and HDCP 2.2 compliant, allowing you to connect a number of 4K source devices. The HDMI output has ARC support, but after an upgrade we can even make it eARC compatible. The Marantz amplifier also has 7 additional stereo inputs and one Phono (MM) input, as well as 7.1 multi-channel inputs.

It is also equipped with 4 composite, 3 component analog video inputs, as well as an RS232C port and a LAN socket. This makes it easy to integrate the amplifier into your home theater system as it is Creston Connected compatible. You can connect to the network with a LAN cable or WiFi.

The frequency transmission is between 10 Hz and 100 kHz with a signal-to-noise ratio of 102 decibels for the analog input and 74 decibels for the Phono input. The device also has a headphone output, infrared input and 2 12-volt Trigger connectors that weigh 17.4 kg and measure 440 x 460 x 185 mm.

The amplifier also supports Dolby Vision, HLG i.e. Hybrid Log Gamma, Dolby Atmos, DTS: X, and Auro 3D formats. Thanks to the Auro 3D format, a separate 10-channel system can be set up without an external amplifier, and the many functions offer countless variations for configuring the home theater. 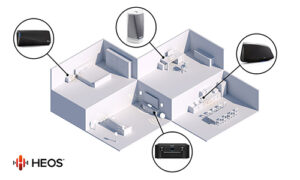 The HEOS multiroom system allows the amplifier to serve two additional rooms in addition to the main zone. In fact, the analog output signals are routed to the other two zones by the amplifier, making it a central part of the system. The HEOS application is easy and fast to download.

As usual with previous models of Marantz amplifiers, the SR8012 also has an Audyssey Multieq XT32 room calibration program that measures and makes the necessary settings together with the included microphone, and the two subwoofers can be measured and adjusted separately.

DSP features such as Audyssey Dynamic Volume and Audyssey Dynamic EQ are very useful. The Audyssey EQ program was much better and more accurate than in our previous experience, the calibrations were flawless and perfect during the settings, the crossover settings had to be fine-tuned a bit more, but this was only for the more perfect end result.

The amplifier, also known as “2ch Playback”, also has a manual adjustment option, which allows you to select a separate speaker setting, two-channel direct or stereo mode. IMAX Enhanced support has also been updated. External antennas are included with WiFi and Bluetooth. Amazon Alexa, Google Assistant, and Siri voice controls are also available through the amplifier, and the MultiEQ Editor controls room correction and setting the maximum filter frequency. New calibration features can also be found in devices such as Sub Level Control, which controls the subwoofer level, Dialogue Level Adjust, center channel adjustment and Bass Sync.

We tested the amplifier in a medium-sized living room, where we connected the Marantz amplifier to a pair of Dali Epicon 8 speakers and an SVS subwoofer.

There is still room for improvement in the acoustics of the living room, so far only a few walls have sound-absorbing acoustic panels, but this is not enough for perfect sound. is.

We first started the rehearsal with a movie. We sat down in front of the 2015 vintage mystical thriller Solace, starring Anthony Hopkins and Colin Farrell, among others. The atmosphere of the exciting and mysterious story was only further enhanced by the amp. Thanks to the combination of excellent speakers and an amplifier, we heard clear, powerful and detailed sound. The most characteristic of the amplifier was sophistication and neutrality, it produced a realistic, realistic stage image, the dynamics were definite, the dialogues were well understood, and it provided a spacious and airy sound.

We also wanted to look at it from a musical standpoint for amp performance. We listened to Dua Lipa’s song We’re Good. The stereo sound was excellent, although it could not surpass the production of a similar category of stereo amplifier. We experienced strong upper and middle ranges, and clarity and distortion-free sounds were maintained even at high volumes. The amplifier was able to sound dynamically even at lower signal levels, and we experienced definite, intense depths and spatiality while listening to music as well. 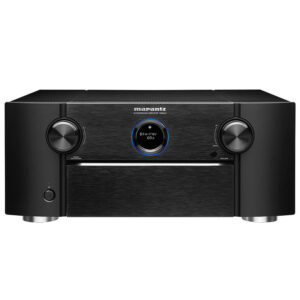 The SR8012 home cinema amplifier is one of the premium category amplifiers. Even previous models have delivered very convincing performance, but thanks to the 11 power levels, this model is truly capable of creating an 11-channel system, supporting all modern spatial formats. It features excellent sound and we have a wide range of flexible settings. The MultiEQ application was improved, which made the necessary settings very precisely. The plethora of connections on the back is no problem at all, thanks to its logical and reasonable, airy layout for easy access. The installation settings are extremely good, although clearer messages and instructions would be needed when measuring the speakers and making room corrections. Integrating it into a home theater or audio system was very quick and easy. The calibration settings can be saved, which is also worth doing.

We have some small critical remarks for that. The remote control is overcrowded and cheaper. The 11-channel, Class AB amplifier is very hot during operation.

What is a multiroom sound system?

The multiroom, ie a multi-room sound system, consists of several separate units, which are usually able to play separately, but one of them controls the others, so we can achieve the same music in different rooms of the apartment without having to move speakers or other speaker devices from one room to another. Multiroom systems are typically wirelessly controlled, even from smart devices.

A multiroom audio system can include speakers, subwoofers, amplifiers, and wireless solutions make it easy and cost-effective to install and design the system without cables. Most multi-room systems can be further expanded later, ie they are modular and extremely flexible. The HEOS multiroom system is one of the basic functions of an amplifier made with modern technology.